Last weekend saw round 1 games taking place in the Dan Breen, Seamus Ó Riain and Intermediate hurling championships. There were some very entertaining games over the course of the weekend with many of the games ending very close on the scoreboard. The next round of the hurling championships will take place on the weekend after next with winners playing winners and losers playing losers. This coming weekend will see the commencement of the county senior and intermediate football championships with a total of 14 games being played from Thursday to Sunday. Again, these 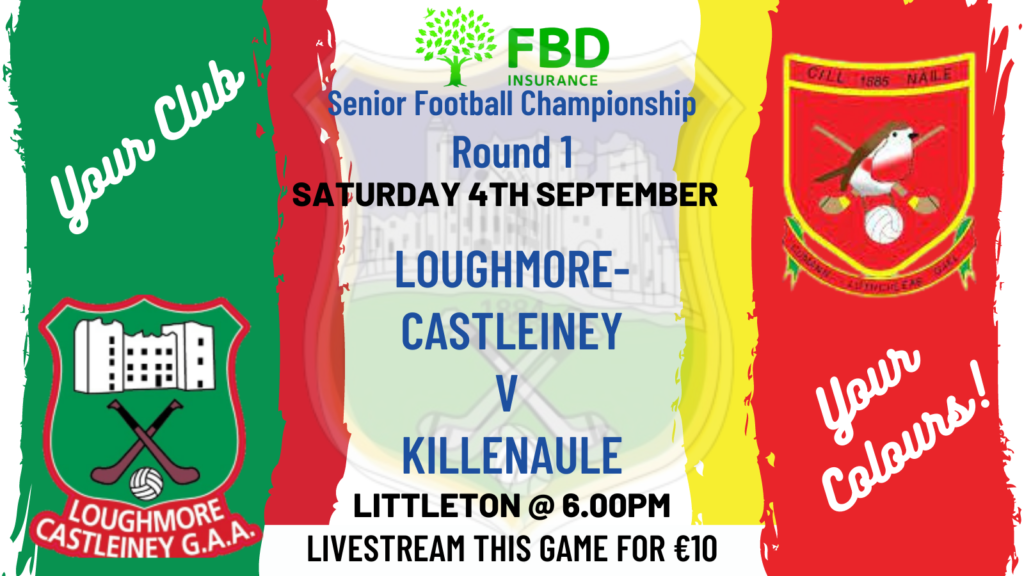 games will be all ticket, so supporters are advised to contact their clubs to book their tickets in advance of the games. Tipperary GAA will be livestreaming Saturday evenings clash between Loughmore-Castleiney and Killenaule which throws in at 6pm in Littleton and as an added bonus, anyone who purchases this game will also get access to the review show for the five Round 1 hurling games which were streamed. This represents fantastic value for your €10. To purchase your digital pass follow the link: https://page.inplayer.com/TipperaryGAA/

Following on from last weekend’s successful Feile na nGael this weekend was the Peil na nGael. again we had a great weekend of GAA action. With 42 teams in 6 Divisions with round games and semifinals played over 12 Venues on Saturday we were down to Finals in DMP on Sunday.

In Division 6 we had a very exciting final between Thurles Gaels and Mullinahone and after a very good game of Football Gaels came out on top on a score of 3-3 to 1-5. The winning captain Ben Loughnane accepted the Division 6 trophy from Morgan Lanigan pro county Bng.

Division 4 Final saw Kilruane Mac Donagh take on Clonmel og after a very exciting tussle Kilruane came out on top on a score of 2-5 to 0-4. The winning captain Eamon Coonan accepted the trophy from Sean oMara Feile Committee

Division 3 Final Moyne Templetouhy played St Pats; this again was a great game of Football with some great scores by both teams. Moyne Templetouhy prevailed on a score of 0-13 to 1-3.  Winning captain Kevin Ryan accepted the trophy from Morgan Lanigan County Bng pro.

Division 2 Final. Clonmel commercials v Moykarkey Borris, despite the final score this was a hostly contested contest with Moycarkey Borris unlucky not to register a few scores but in the end Commercial were comfortable winners on a score of 2-9 to 0-0. The winning captain Darragh Landers accepted the trophy from County Secretary Bng John Sheedy

Division 1 Final was a real cracker when Arravale rvs and JKBrackens faced up to each other.After a fine first half where both sets of defenders were brilliant the score was 0-1 to 0-1. In the second half scores were again very hard to come by with again both teams defending stoutly and when referee Andrew Purcell blew the final whistle the teams were level 0-5 to 1-2. Two periods of extra time 5 minutes a half were played after which Arravale rvs prevailed by the slenderness of margins. 0-7 to

Well done to Ardfinnan’s Derek O’Mahony on a fine refereeing performance in last weekends All Ireland minor football final between Tyrone and Meath in Croke Park. Derek was not the only Tipperary connection to this years final. Teenager Brian O’Halloran made a late cameo appearance for the victorious Meath minor footballers who bridged a gap of twenty-nine years by winning the Tom Markham Cup after a thrilling and dramatic one-point victory over Tyrone at Croke Park last Saturday. He replaced man-of- the-match Liam Kelly in the closing stages. Brian is a son of Ballivor-based Lattin native Pat O’Halloran, who is a well-known figure in Meath GAA circles with Ballivor footballers and Kildalkey hurlers.

“It was some performance from the Meath boys and it’s great to see the Royal County back on the big stage again,” said Pat who also praised the influence and leadership of their manager Cathal O’Bric. “He is a teacher in Boyerstown and has been involved with the Meath GAA underage academy for a number of years and their work certainly paid off last Saturday. Most of those boys would have been together for four years which was when Brian got involved and it was great that he saw some action on a very special day, but fair play to all the team for a memorable display that hopefully will influence the rest of their playing careers.

Commiserations to the Tipperary senior camogie team who lost out to Galway in last Sundays All Ireland semi final played in Croke Park. Having seen the players at training in Dr Morris Park on a number of occasions, I have seen the hard work and commitment they have given to their team over the past number of months and while luck may not have been on their side on this occasion, it wont be too long before this group of players will be bringing glory back to the premier county.

Congratulations to the Tipperary senior ladies footballers who retained their senior status thanks to a fine performance that saw them overcome Tyrone by 7-10 to 3-16 on Saturday last in Kinnegad. Five goals in the opening half handed Tipperary a lead Tyrone could not overcome. Marie Creedon (2), Áine Delaney, Roisin Daly and Aisling McCarthy all got goals in the opening half for Declan Carr’s team. And while Niamh O’Neill contributed 1-9 to the scoreboard, Tyrone were unable to get through a resolute Tipperary defence and they will play in the intermediate championship in 2022. Well done to all concerned and we look forward to next seasons campaign in the hope that a little more success will come the way of the players . 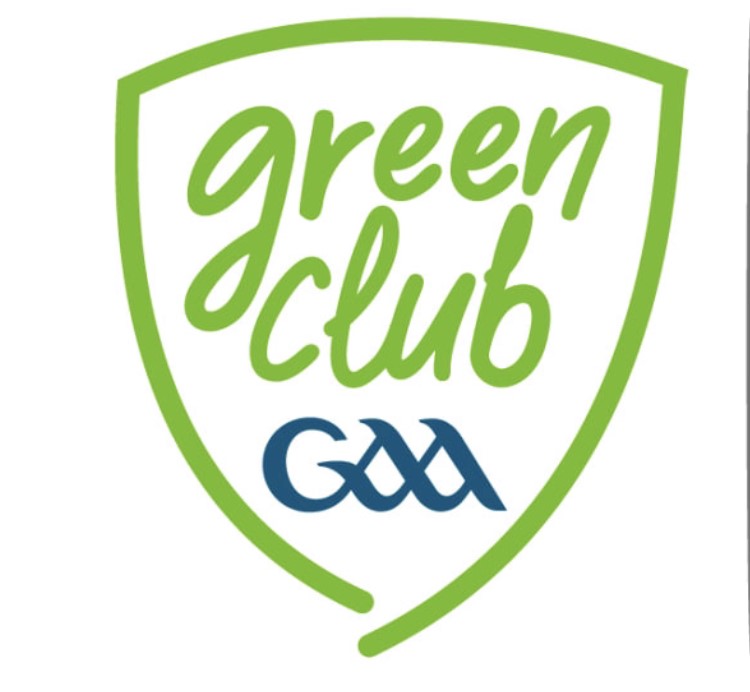 As part of the new Green Clubs programme, the GAA, in collaboration with the Regional Waste Management Authority and Irish Water, the GAA recently launched an initiative to eliminate single-use plastic bottles from Gaelic Games clubs and grounds.

45 clubs in Ireland are taking part in the pilot Green Clubs programme and, along with Clarinbridge in Galway and Cappagh in Kildare, are members of the Waste group of the GAA Green Club programme. Waste is one of five thematic areas being explored by participating clubs, along with water, biodiversity, energy, and transport.

The first major project for the GAA Green Clubs in the Waste group is a campaign to eliminate single-use plastic. Green Club partners the Regional Waste Management Authorities have developed a ‘Puc Single-Use’ toolkit to support participating GAA Green Clubs in identifying and eliminating single-use plastic in their grounds and activities, starting with drinking water bottles. Nearly 50% of all plastic produced world-wide is single-use and Ireland is responsible for the highest rate of plastic production per person in the EU.

Irish Water has supplied the Green Clubs taking part with 1500 reusable water bottles and each club has nominated a number of teams to champion the initiative. Sammi Chang from St Patrick’s in Limerick explained how the measures of the GAA’s safe return-to-play policy had already encouraged teams in the club to look at their use of disposable water bottles. “Because of the Covid risks, some of the adult teams in the club had begun to look towards individual reusable bottles. Having the Green Club toolkit as guidance, we can now develop this as a policy across the club so that this measure won’t be just for one summer or one year – this is a commitment that St. Patrick’s are proud to champion for the years to come.”

Laois club Park/Ratheniska were represented at the launch by Green Team member Eileen Dunne, who is also the club’s Healthy Club Officer. This club’s plastic elimination programme, which is being championed by the club’s juvenile section, received a significant boost recently when the club’s adult football team also decided to go plastic free.

Lucan Sarsfield’s Jo Mahon is not only a Green Team member but is also club secretary and a member of the Healthy Club team, “It makes perfect sense for Lucan Sarsfields to be involved as a Green Club – the values and aims of the Green Club programme reflect who we are as a club and community and complement a huge amount of what we do already through the GAA Healthy Club Project.”

The three Waste Management Planning Regions were represented by Regional Co-Ordinator Hugh Coughlan who said “The three Regions are delighted to be supporting this initiative by the GAA to reduce single-use plastics, which is very much in line with the ambitions of National and Regional Waste Policy. The GAA’s commitment to developing more sustainable clubs through its Green Clubs initiative has significant potential not just for the clubs but indeed for the wider community given the GAA’s unique presence in Irish society”

Irish Water was represented by Managing Director Niall Gleeson, who said: “Delivering Ireland’s water services in a sustainable and socially responsible way is a key priority for Irish Water. Like the GAA we operate in almost every town and village in the country, safeguarding our precious water supplies and returning treated wastewater safely to the environment. We are delighted to support this great initiative by providing clean drinking water in reusable bottles which will help tackle the growing problem of plastic waste and protect the environment.”

More information on the GAA’s Green Club programme is available at www.gaa.ie/greenclub and greenclubs@gaa.ie 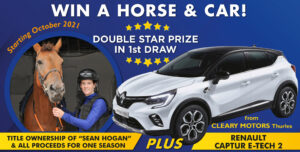 The all new 2021 – 2022 Tipperary Clubs draw has been launched and once again this year it is packed with amazing prizes, none more so than the star prize in draw no 1. Not only will the lucky winner be driving off in a brand new Renault Captur E-Tech 2 from Cleary Motors Thurles, they will also win title ownership of racehorse Sean Hogan. The winner collects all prize money from his races & gets to meet the horse and select colours that he runs in. Sean Hogan the 6-year-old prizewinning racehorse is trained in Tipperary by Mouse Morris. In total this years draw will have 11 cars, cash prizes ranging from €5000 to €200 as well as the monthly lotto jackpot which will be a minimum of €3000, and some very attractive holidays including a Family Holiday to Australia, Cheltenham Trip for 4, Florida Family Holiday, Lapland Trip for 4 and a Golf Holiday for 6. And as the saying goes “You have got to be in it to win it”, so if you want to be in with a chance of winning a prize while also helping your local club financially, you can join now via the Tipperary GAA website https://tipperary.gaa.ie/shop/tipperary-2021-2022-draw/ , by contacting Lar Na Pairce or with your local club promoter and it only costs €100 for the year.