This coming weekend will see the Quarter Finals of the FBD Insurance County Senior and Intermediate Football championships taking place with games fixed for Friday, Saturday, and Sunday. For all tickets to this weekend’s games are now available to purchase online via the ticket section of the Tipperary GAA website: https://embed.futureticketing.ie/c/tipperary-gaa/ 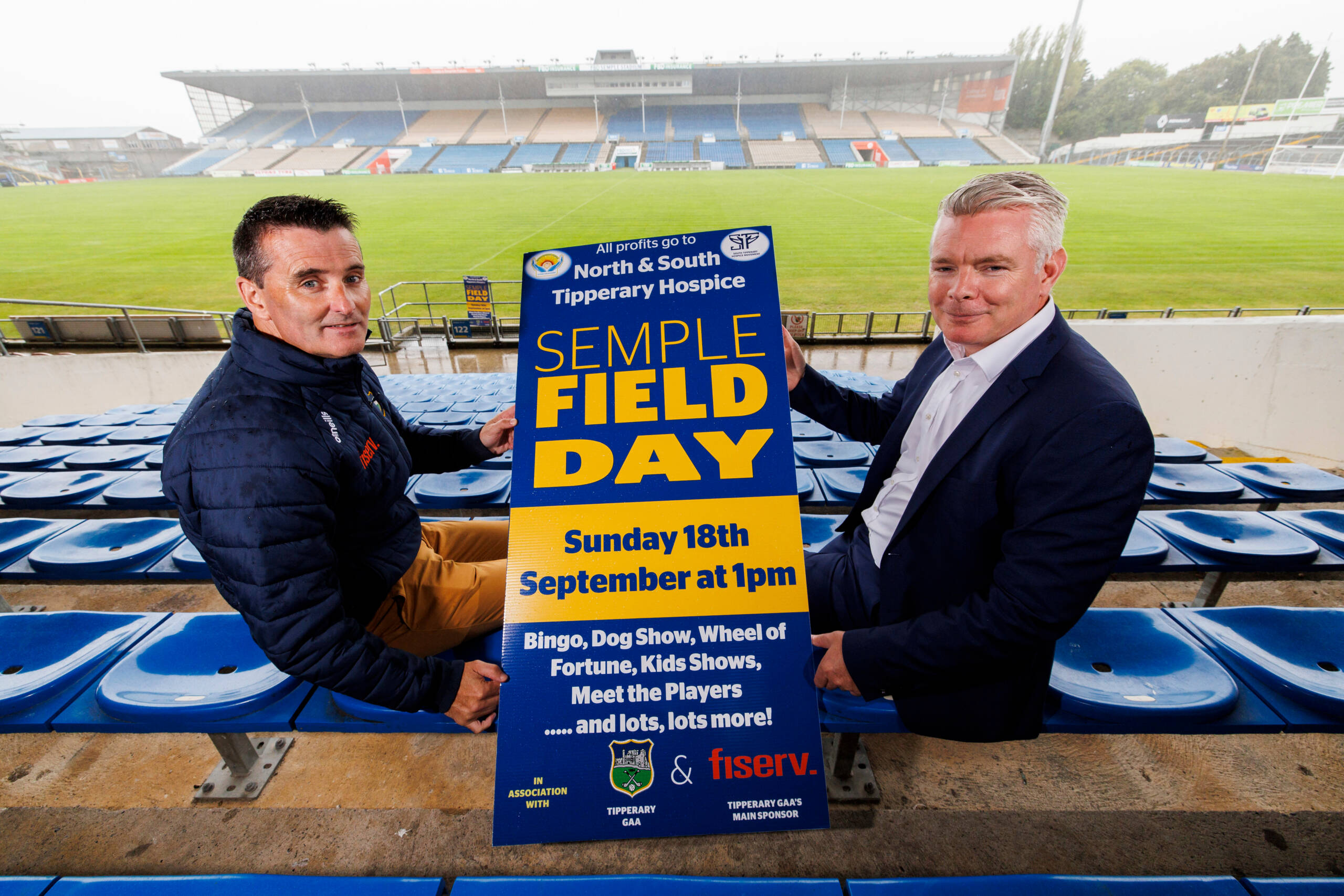 FBD Semple Stadium will be a hive of activity this coming Sunday, September 18th as the famous venue plays host to the Semple Field Day. The event which takes place in association with Tipperary GAA, Fiserv and Semple Stadium promises to be a great day out for all the family, with activities and events for both young and not so young throughout the day.

When Fiserv came on board as the official sponsor to Tipperary GAA, they also expressed a genuine interest in supporting local organisations and charities each year through events such as the Semple Field Day which this year will be in aid of North and South Tipperary Hospice.

Events will get under way at 1pm with a dog show in Semple Stadium, with registration for the event from 11.30am and also at 1pm there will be a monster bingo in the Dome where the prize fund will be an amazing €4000. Field events for both kids and adults will commence at 2.30pm, while at 4.30pm there will be an auction and wheel of fortune in the Dome. On the day the car park in Semple Stadium will be transformed into a market area with lots of stalls catering for all interests. Speaking at the launch of the Semple Field Day, Brian Fogarty from Fiserv said that the Semple Field Day promises to be a great day and will hopefully raise some very badly needed funds for the brilliant organisation that is the hospice. Brian also said that it takes over 1.3 million euro to run the hospice between North and South Tipperary, so every euro raised in Semple Stadium on September 18th will be put to good use and he appealed to the public in Tipperary to come along and make it a day out for all the family. Gates open at 11.30am and patrons attending will be asked to make a minimum donation of €5 at the gate.

Scór Sinsear 2022 is fast approaching. Tipperary has a proud and long tradition of Scór and we are urging clubs to continue this in the coming weeks. Our Tipperary Scór Final will take to the stage on Saturday evening October 1st at 7pm in Newport Hall. Full details will be released to the clubs in due course and this year we will have an online entry form for clubs to fill out. This will be sent to all club secretaries during the coming week. If any person or club have any queries please don’t hesitate to contact us at irishculturalofficer.tipperary@gaa.ie

We look forward to welcoming Scór Sinsear back to the stage and keep the Scór flag flying high here in the Premier County!

Coiste Náisiúnta Scór will be hosting its final webinar this Sunday, to support clubs and counties across the country in promoting Scór Sinsir 2022. For clubs who are new to Scór, it is a celebration of our culture and heritage, showcasing our language, music, stories and dance.

As it has been two years since we last held Scór Sinsir competitions at local level, Coiste Náisiúnta Scór want to offer everyone an opportunity to attend this final webinar that will provide support to clubs who wish to enter the competition.  Clubs are welcome to join our webinar where we will be able to answer questions and provide any information that is needed for Scór Sinsir 2022.

There is no limit on the amount of people that may join from a club.

Padraic Maher On The Line

Padraic Maher is one of the greatest hurlers of his generation and an icon in his beloved Thurles Sarsfields and Tipperary.

Winner of three All-Ireland senior hurling medals and six All-Star awards, Padraic was one of Tipperary’s key men for over a decade — detailed to mark some of the biggest names in the history of the game — while with his club, Thurles Sarsfields, he ignited a revival that led to seven county titles. But then in early 2022, in his playing prime, he was forced to retire due to injury.

In his memoir, he looks at the effect that decision had on him and, in doing so, takes us back through his life and playing career.

From being a central figure in the great Tipperary-Kilkenny rivalry, to the unforgettable trilogy of Tipperary-Galway All-Ireland semi-finals, to his side of one of the most famous tackles in hurling when challenging Joe Canning on the Hogan Stand sideline, along with the personal challenges he has faced along the way, we are given an insight into new generation of GAA players in modern Ireland. The book will be launched on November 3rd, but you can pre order your copy by following the link: https://linktr.ee/allonthelinepadraicmaher , we wish Padraic the very best of luck with his new book which is sure to be a very interesting read.

After the great success in the singles finals Tipperary players continued their winning ways in the All-Ireland doubles Semi Finals.

Five years after the club’s successful 60th Anniversary celebrations in the Ballykisteen Golf Hotel, Tipperary a number of the London-based Sean Treacy’s GAA club members are making yet another nostalgic trip to Tipp on Friday 4 November. This time their destination will be Cashel – the home of Timmy Moloney, one of their greatest ever players during his time in exile in the 90s until he returned back home in 2002.

The evening is being dedicated to Timmy who has been stricken with bad health in recent times and so it will be a rare opportunity for the many people who knew and played with and against the Cashel King Cormacs colossus to support him during these very difficult times for him and his family. A recently established WhatsApp promoting the event has attracted considerable interest on both sides of the Irish Sea and the event, which is being hosted by Brosnan’s, is likely to draw a very large attendance. Further details of the function will be revealed in the coming weeks.

In the meantime please contact Martin Carroll on 00 44 7885 459080 for more information about the function or email:seantreacyslondon@gmail.com