Last weekend was another busy one on the playing fields of the county with a total of 3 finals, 6 semi finals and a quarter final taking place. The focus for many was on FBD Semple Stadium last Sunday afternoon with the staging of both the Premier Intermediate and Senior hurling championship finals. In the Premier Intermediate, a big crowd was in attendance to witness Gortnahoe Glengoole and Roscrea battle it out for the Seamus Ó Riain cup and a place at the top table of Tipperary club hurling in 2023. This was a very entertaining game of hurling that in the end went the way of the Roscrea men, but could just as easily have gone to their opponents were it not for some point blank saves by Roscrea net minder Daryl Ryan. There were emotional scenes at the full time whistle as the North Tipp side along with their supporters gathered on the field to witness their teams joint captains raise the cup. 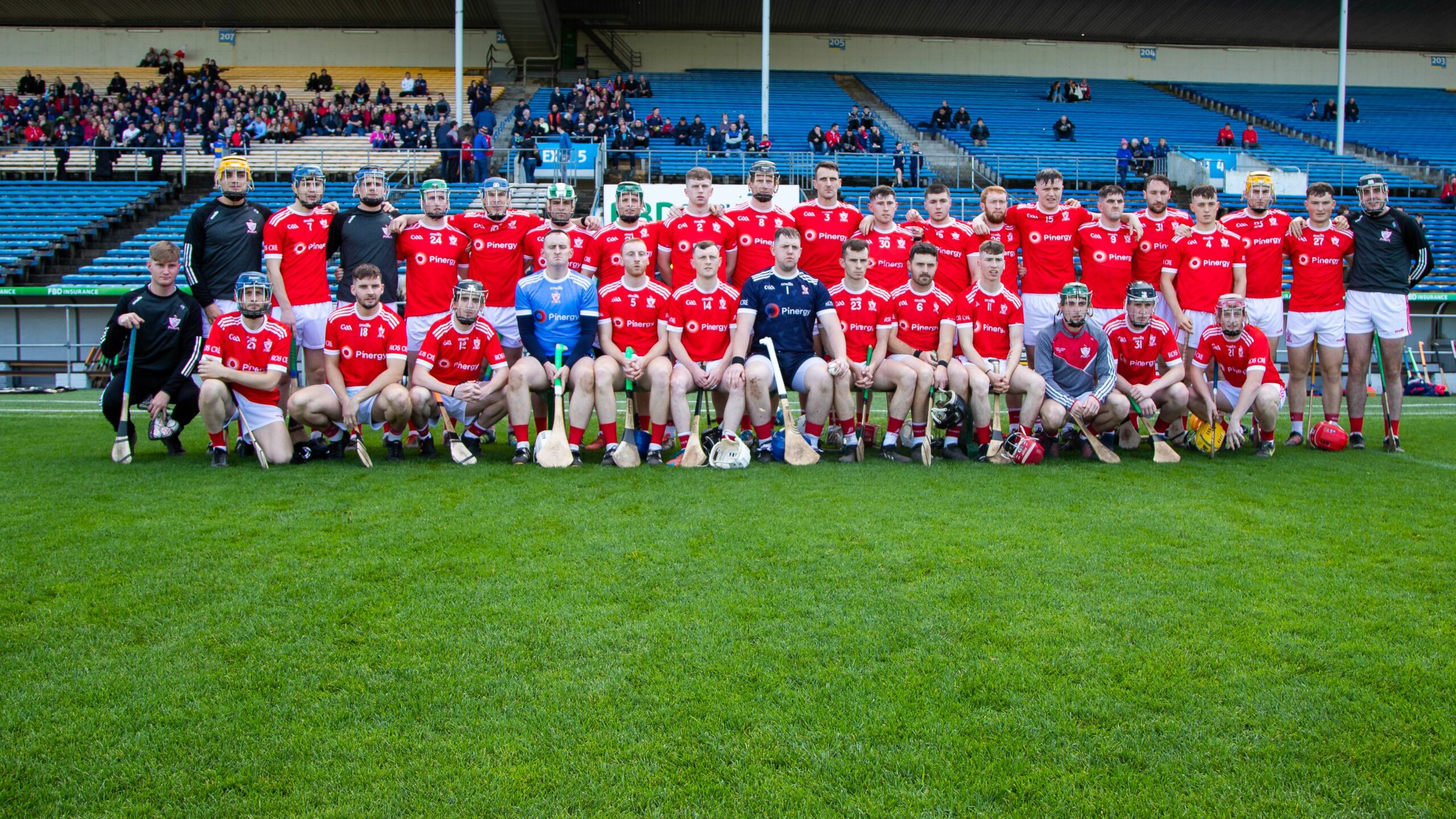 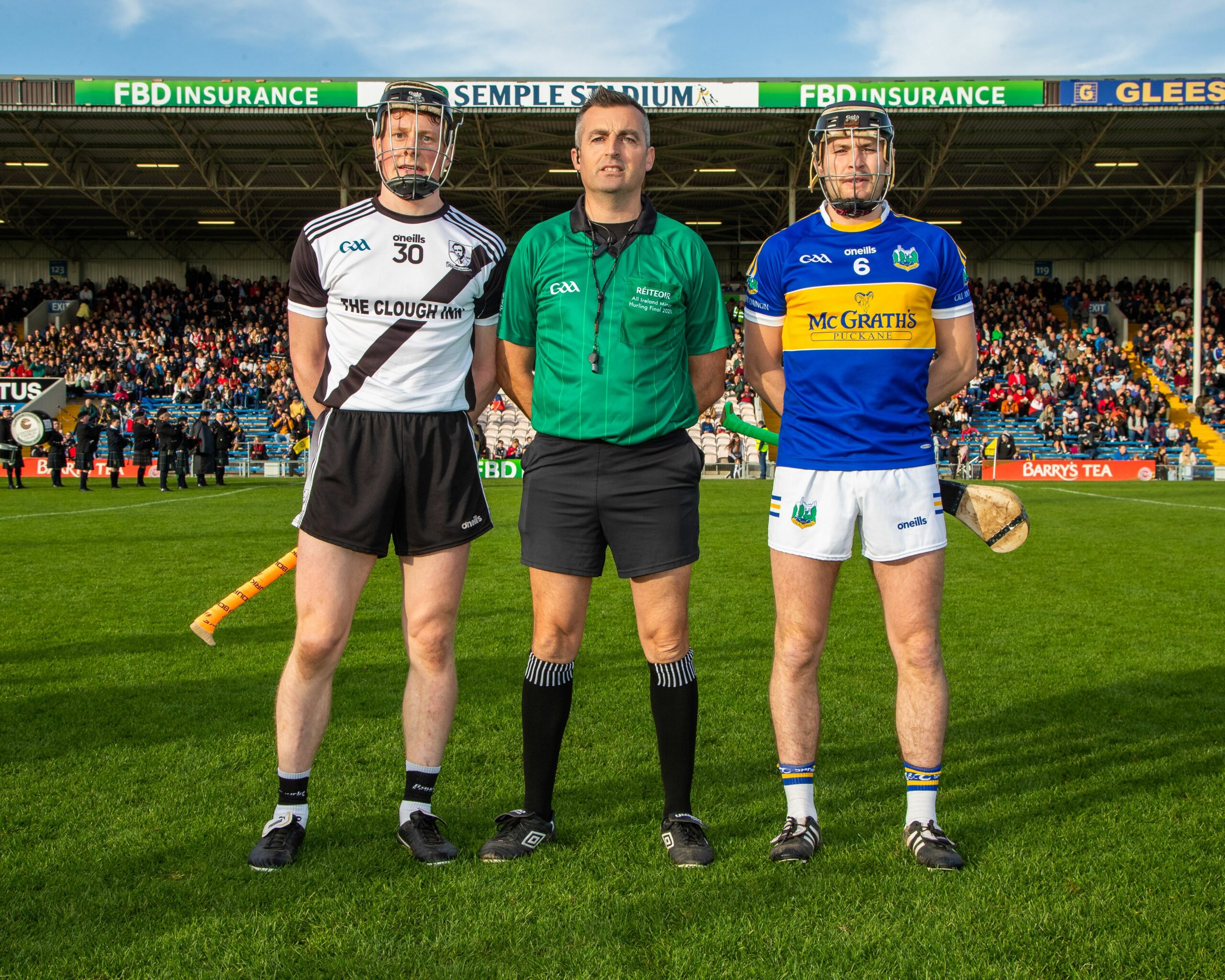 The Senior decider was an all North Tipperary affair as neighbours Kilruane MacDonaghs and Kiladangan came to town. Played in glorious autumnal sunshine this was a well contested game of hurling that ebbed and flowed from end to end, with never much more than a score or two between the teams. Kilruane MacDonaghs did have the advantage for much of the game but as the game reached its conclusion in was the men in white and black who were behind. But thanks to the pin point accuracy of Willie Cleary, the game ended all square 2-18 to Kiladangans 1-21 and so a replay will be required to decide the destination of the Dan Breen Cup for 2022.

The final of the FBD Insurance County Junior A hurling championship took place in Golden on Saturday between Grangemockler Ballyneale and Upperchurch Drombane who were hoping to capture some silverware following the dissappointments of the previous two weekends that saw both their senior teams bowing out of the championships. Played in front of a very large attendance this game was of an excellent standard as both sides set about their business in a very determined and workman like fashion. In the end it was elation for “The Church” as they held out for a 2-19 to 1-19 win. Following the full time whistle, County chairman Joe Kennedy presented the cup to Upperchurch Drombane stalwart Patt Shortt, captain of the winning side. Grangemockler Ballyneale will naturally have been disappointed to lose the final but the year is not over for them yet as they will now represent Tipperary in the Munster championship. 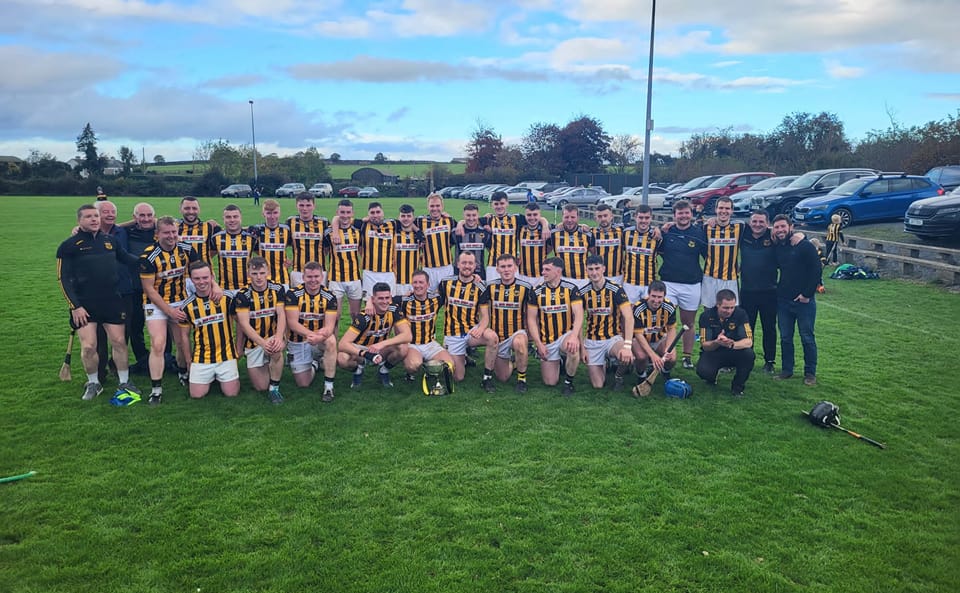 Both intermediate hurling semi finals took place on Saturday afternoon, in Toomevara Drom and Inch were hoping to reach this year’s final but knew that it would take an almighty effort to overcome Lorrha Dorrha who had been showing very good form in all their games to date. In the end it was a bridge too far for Drom and Inch as they had to give way to their opponents on a full time score of 3-27 to 1-06. The second semi final was a much closer game between Moneygall and Skeheenarinky in Boherlahan. The South Tipperary side looked as if they were going to cause somewhat of an upset but Moneygall came to the front at the right time to claim victory by 2-14 to 2-11.

Last weekend also saw the semi finals of the FBD Insurance County Junior B Hurling Championship taking place. On Saturday Portroe and Solohead met in Newport and it was the West Tipp men who emerged victorious by 2-22 to 2-14, while on Sunday in Moneygall the Junior’s of Lorrha Dorrha were hoping to emulate the achievements of their Intermediated by reaching this year’s final with a win over Thurles Sarsfields. Unfortunately for Lorrha Dorrha this game proved to be a step too far for them as Thurles Sarsfields went on to win by 0-24 to 1-11.

In the under 19 football championship, Clonmel Commercials qualified for this year’s A final thanks to a comfortable 3-14 to 0-09 win over Ballina. While in the B semi finals Galtee Rovers defeated Boherlahan Dualla by 0-10 to 0-07 and they will now play Fethard who received a walk over from Nenagh Eire Óg, in this year’s final.

There was also a game played in the FBD Insurance County Junior B Football Championship, as Shannon Rovers had a point to spare over Grangemockler Ballyneale in their Quarter Final which was played under the lights in Templetuohy.

There are seven games down for decision this coming bank holiday weekend with the highlight being an Intermediate and Senior hurling final double header in FBD Semple Stadium on Sunday afternoon. There are also finals in Junior A football and under 19 B football as well as semi finals in under 19 A football, under 19 A hurling and under 19 B hurling.

Tipp GAA TV will be streaming both games from FBD Semple Stadium on Sunday afternoon, so if you cant make it along, you will be able to watch all the action online.

The Nenagh Eire Óg team of 1995 were guests of honour at last Sundays county finals in FBD Semple Stadium as they were being acknowledged for their great achievement of 27 years ago. Played in front of a crowd of over 15,000 supporters, the pairing was unique. Never before had Boherlahan-Dualla and Nenagh Eire Óg met in a county final. Never before had the North side won a senior final. In fact, they had appeared but once in that stage of the competition, in 1993. On the other hand, the Mid side of the equation, with a noble fine tradition of appearing in and winning finals, hadn’t appeared in a final since 1953 and hadn’t won one since 1941! So, there was hunger on both sides and the supporters turned out in their thousands to find out which side was hungrier and whither the destination of the Dan Breen Cup.

The players and team management were introduced to the crowd between the Premier Intermediate and Senior hurling finals last Sunday and later that evening they were entertained in the Abbey Court Hotel.

Michael Hogan Under 13 Festival of Football

This coming Saturday, October 29th will see the staging of the annual Michael Hogan under 13 football tournament. With in excess of 50 teams taking part it is certain to be a great days football. All teams are asked to be at their appointed venue no later than 9.30am to allow for team photographs and the prompt running of the days activities. However for teams competing in group 4, the starting time is at 9am so they will have to be at the venue at 8.30am, this is due to the fact that Fethard Town Park Astro pitch has bookings and must be vacated earlier.

The groups are as follows:

The Tipperary New York Hurling Club’s annual dinner dance will take place this year on Sunday December 3rd in the Lake Isle Country Club, Eastchester. On the night they will celebrate the 2022 guest of honour Roger Slattery. On the night presentations will also be made to Tipperary man of the year- Toby Kavanagh, Senior hurler of the year – Darragh Peters and Junior hurler of the year – Eoghan Hurley. Special guests for the event will be Tipperary Minor hurling manager James Woodlock and team captain Sam O’Farrell. For more details on how to purchase tickets for this event or advertise in the event catalogue, please email: tippnyc@outlook.com

A unique Sean Gael ‘get-together’ of former London-based hurlers from the 1960/70s is being planned for Friday 18 November at the Horse & Jockey Hotel. Holycross man Johnny Barrett is the ‘brainchild’ behind the occasion intended to be a night of reminiscing and the sharing of memories of their playing days with the now defunct Brian Boru hurling club. It is will also be an opportunity to present previously unclaimed London Sean Gael awards to some of these former players.

Johnny Barrett himself will certainly need no introduction to anyone involved in London GAA for well over fifty years. He was a stalwart of the Brian Boru club from the 1960s until its sudden and unexpected demise in 2000 – over one hundred years after the club was first established. He is also the uncle of current Tipperary star Cathal Barrett and was also the only Tipperary representative on the London Hurling Legends team of 2010. Johnny will be also be remembered for his outstanding London county championship displays against Galway and Limerick in 1973.

But the Brian Boru club had several other members from Tipperary during its distinguished history from the early days just after the establishment of the London GAA County Board in 1896. Limerick man Sean Og Hanly, a native of Kilfinane, is credited with being one of the founder members of the Brian Boru club and when London won their only All-Ireland senior hurling title against Cork in 1901 it comprised of entirely Brian Boru club members including Thurles man Michael McMahon….the sole Tipperary representaive on that famous historic team.

Other significant Brian Boru figures from the Premier County in the last half century have included Drom & Inch native and former London GAA Chairman Paddy Ryan who was hailed as being one of the club’s greatest influencers in promoting the game in that same era before his untimely passing in 1978. Among the pick of other Tipperary men in recent times to don the famous black and amber hooped jersey were Cappawhite men Patsy O’Neill (RIP) and the McDermott brothers Pat and Martin, Lattin native Fonsie Condon, Johnny Hickey (RIP) from New Inn, Roscrea’s Michael Loughnane, famed goal-keeper and Gortnahoe native Willie Barnaville and not forgetting the event organiser himself – Johnny Barrett.

This upcoming event will therefore be concentrating on two of the more successful decades in Brian Boru club history in the 1960/70s – coinciding also with the ‘golden-era’ of London county hurling achievements. It is hoped therefore that as many of the survivors from that era will be present in the Horse & Jockey that evening. A number of these former players have been contacted and the reaction has been very encouraging. Many other players outside Tipperary including Waterford’s Martin Kirwan and Roger Cashin, Kilkenny’s Liam Walsh and Clare’s Mick Hassett have also expecting to be in attendance.

But any player who has ever had any affinity and association with the Brian Boru club from Tipperary and beyond will be most welcome on what promises to be a very special and nostalgic evening on Friday 18 November.

The 2023 Tipperary GAA Yearbook is being compiled at present and the Yearbook committee is seeking articles and information for inclusion. If you have something you would like included you need to have it submitted by Friday November 11th.

Clubs that have accomplished any unique achievement in 2022 are requested to send through an appropriate article for inclusion. Similarly, it is most important that clubs record and document any charity or fundraising events they undertook. These events epitomize the heart and soul of the GAA in every parish and their community across the Premier County.

The Yearbook committee are looking to all clubs to submit any obituaries of their deceased members in the last 12 months. The maximum number of words for an obituary is 150 and please include the club’s name and the years also, e.g. 1939-2021, as well as his/her G.A.A. achievements and a photograph of the deceased person.

Please e-mail information and photographs which must be named to Tipperary Yearbook Committee at yearbook.tipperary@gaa.ie