Tipperary GAA County Board have launched an online YouTube video encouraging everyone to stay safe and continue the efforts to beat Covid 19. 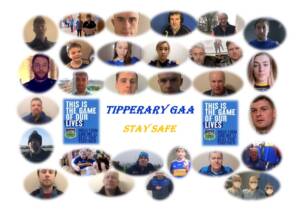 Players, management, officials and supporters have come together virtually to share the Tipperary versus Covid 19 message. We are asking everyone to hold firm, stay positive and we will beat this together. The video which includes players Jake Morris, Michael Breen and Noel McGrath from the Tipperary Senior hurlers, Michael Quinlivan, Conor Sweeney and Brian Fox from the footballers along with well known Tipperary personalities Una Healy, The 2 Johnnies, Johnny Luby and many more, expresses the simple but clear message that if we all stick together as one big team and keep doing the right thing we can and we will beat the virus. The video also features some of those most impacted by the virus, our frontline workers and nursing home residents.

Covid 19 has impacted hugely on everyone over the last year throughout Ireland and the world. It raced on to the field and took an early lead, but like so many great teams who have graced the playing fields across our great country, we have stood strong and we are once again taking control of the game. So now is not the time to become complacent or to relax, now is the time to tackle the opponent, dominate possession and keep the scores on the board. We are asking all clubs to like, share and Retweet the video on social media and also to share the video link via your various messaging groups. We are also asking you to share the video with your local schools and other groups within your area to help us spread the message. 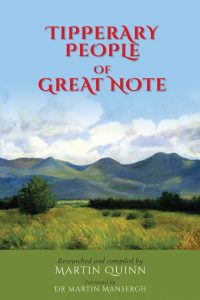 Well known Tipperary man Martin Quinn has recently published his first book titled ‘Tipperary People of Great Note’. The book is a remarkable look at 86 influential historical figures of great note from Tipperary Town (Ireland) and district (all within a 20km radius of Tipperary Town) dating from as far back as the 1100’s through to 2000’s. They are all of Tipperary heritage, either having been born and raised here or having come to reside here.

Former Minister of Sate, Dr Martin Mansergh has written the foreword to this remarkable book. Dr Mansergh writes that ‘The most important heritage of any area is its people. Irish people particularly are rooted in place, even when living elsewhere. For this volume, Martin Quinn has selected eighty-six men and women, mostly from the last three hundred years, from Tipperary Town and district, all of whom left their mark. A few we will have known personally. More we will have heard of. Others we are glad to learn about. Each biography gives a picture. Many of us will be stimulated to find out more.’

The book is published by Orpen Press and is available from them @ https://orpenpress.com/books/tipperary-people-of-great-note/

and is also available from bookshops in Nenagh (The Nenagh Bookshop), Thurles (Bookworm Bookshop), Clonmel (The Bookmarket) and in Limerick from O’Mahony’s Booksellers. 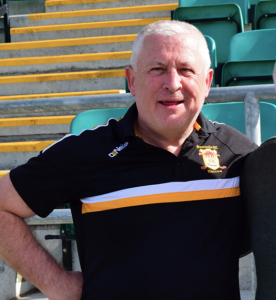 Granualile clubman Donal Corbett was elected London GAA Chairman at their Annual County Convention last Saturday 30 January. The former Shannon Rovers clubman also became the first Tipperary man to hold the chairmanship since Ballyporeen native and Desmonds clubman Eugene Hickey who was elected in 1991 and held the position for four years before being succeeded by Laois native John Lacey. And by a strange coincidence Donal Corbett now succeeds the same John Lacey who has just completed his second term in the London GAA hotseat.

But similar to all meetings and conventions this year’s London GAA Annual Convention was conducted online observing the current Covid-19 protocols and restrictions and the result was announced in mid-afternoon last Sunday. Donal Corbett saw off the challenge of Fulham Irish clubman and Carlow native John Doyle.

“It’s a great honour for me, my family and my club” said a delighted Donal Corbett who has been involved with Harrow-based Granuaile club since 1999. He is the club’s current assistant secretary and also held the club’s chairmanship between 2012 and 2019. Before that he served as club treasurer from 2004 until 2012.

At county board level Donal Corbett was the outgoing treasurer serving his second spell in that position since September 2019. He first joined the London GAA County Board in 2009 in the position as treasurer of the Ruislip-based London GAA Social Club before taking on the county treasurer’s role for the first time a year later and occupied that role for three years. Donal Corbett also served on the Croke Park committee overseeing the redevelopment of the McGovern Park redevelopment at Ruislip which opened in 2017.

Best wishes to Donal Corbett in his new role as the follows in the footsteps of fellow Tipperary men Eugene Hickey and the late Paddy Ryan in the early 70s. A native of Drom & Inch and member of the Brian Boru’s club, Paddy Ryan achieved legendary status in London GAA history during his twenty years with the Exiles before his untimely passing in 1974.

Ronan Maher and Michael Breen have been nominated for All Stars and Jake Morris is one of three nominees for Young Player of the Year but you can pick any player from the squad. The field is open and the choice is completely yours.

The 34th Annual General Meeting of the Tipperary Supporters Club will be held on Thursday 18th February 2021 at 8pm. Due to Covid-19 Level 5 restrictions it is necessary to hold all our meetings online via Microsoft Teams.

Members are invited to join the meeting. Please register by sending an email to info@tippsupportersclub.com providing your email address by Thursday 11th February 2021. On receipt of your registration and your email address we will forward a link to you for the meeting with further details regarding participation.

Please note you must be a fully paid-up member of the Tipperary Supporters Club to join the meeting. Any Motions to be submitted to the Secretary in advance of meeting at bcoman52@gmail.com.

Tipperary supporters club membership for 2021 is still open and Supporters can join on line now on www.tippsupportersclub.com/join  by credit card or debit/laser card. You can also pay by Credit Card over the Phone by calling 0863580718, membership is €40 per person. Also, on the website details are available of the direct debit facility as the Club is run on a completely voluntary basis it would be a great help if members could join by direct debit. We are encouraging members to switch to Direct Debit payment by offering a reduced charge of €30 for all New First Time Direct Debit members in 2021. It is easy to sign up for Direct Debit, just download the form on the Tipperary Supporters Club website, fill it out and send it to Jim Reidy 13 Castleknock Close, Dublin 15.

Every year Upperchurch Drombane GAA Club hold a Charity Fundraiser either in late December or early January and this year was no exception. After careful planning over zoom this year’s event was settled upon and a 7km route was established starting in Upperchurch Village and up over Moher Hill, down to Ballyboy and back via Gurtnaskeha to the Village.

This year’s chosen charity was Cameo Care Dementia Support, Thurles. A Go Fund me page was set up and the clubs social media pages lit up as people contributed to the worthwhile cause. Given the current national health crisis, people could walk or run the 7km in their own time on a day that suited them which was a change from the previous social event it had become when all raced or walked together.

Many walked at their leisure but many also competed to ensure they could secure a top finish. Times ranged from 29 minutes 25 seconds with others approaching the hour mark.

The top male and female duo set the pace and first home respectively were experienced runner Willie Shanahan and Orla Pamplin followed by her mom Kelley. Willie and Orla led with incredible times in trying weather conditions. A total of 3,400 euros was raised for Cameo Care through the event and overall, it was a huge success.