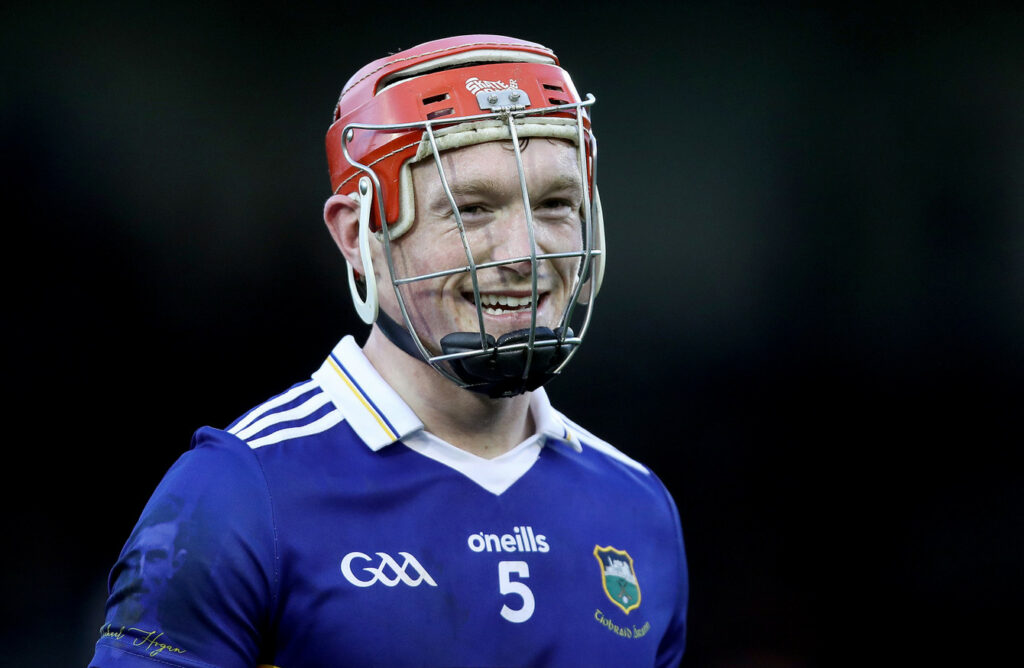 A great veil of sadness has descended over our county and in particular the parish of Clonoulty Rossmore since the passing of Dillon Quirke last Friday evening. Dillon was a fine young man who in the 24 years he spent on this earth made an immense contribution to his parish and county both in sporting terms and in life in general. He will be remembered for many things but for those of us who had the privilege of knowing him through his involvement with Tipperary hurling teams, along with our memories of his skill and determination, he will be remembered for his smile and happy demeanour. His many achievements at both club and county level have been well documented and the pride he took in everything he achieved was unquestionable. The large crowds that attended a vigil for Dillon in the Clonoulty Rossmore GAA Club grounds on Saturday evening as well as his home on Monday and his funeral mass on Tuesday showed the effect his passing has had on so many people from both near and far. Clonoulty Rossmore GAA club and Tipperary GAA have received many messages of sympathy and support from clubs and counties all over the country as well as other sporting and non sporting organisations and we thank each and everyone of them for the messages of support for Dillon’s family at this sad and difficult time. Tipperary GAA extends its heartfelt and sincere sympathies to Dan, Hazel, Shannon, Kellie and the extended Quirke and Fryday families. Also, to the Clonoulty Rossmore GAA Club and his teammates who will all miss him greatly. We also think of Dillons teammates on the Tipperary senior hurling panel and also those who played with him on the various Tipperary underage teams. On Friday evening Dillon was playing the game he loved with the friends he loved for the club he loved in Semple Stadium the field of legends, Dillon will forever be a legend in Clonoulty Rossmore and Tipperary. May you Rest in Peace Dillon and thank you for the memories.

As Dillon Quirke was laid to rest today, Holycross Ballycahill player and close friend Seanie Nally wrote a touching tribute to Dillion through poem. We’d like to share this as a memento to remember a wonderful young man. Ar Dheis De go raibh a anam. 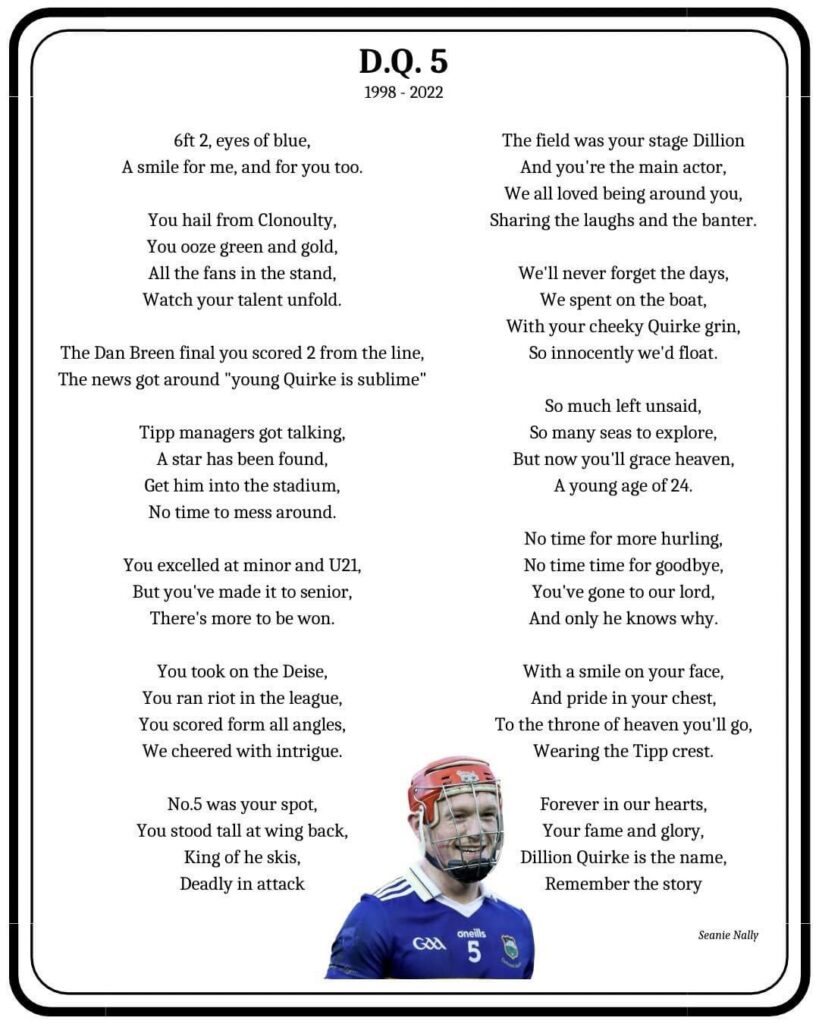 A number of games took place in round 2 of the FBD County Hurling Championships last Friday evening, the remaining games which were due to take place on Saturday and Sunday were postponed as a mark of respect to Dillon Quirke and it is now expected that these games will now take place on the weekend of August 19th to 22nd. The Competitions Control Committee will also be releasing an updated fixture programme in the coming days.

This coming weekend will see Round 2 of the FBD Insurance County senior and Intermediate football championships taking place with games scheduled for Friday evening, Saturday and Sunday. Tickets for all this weekend’s games are now available to purchase online via the ticket section of the Tipperary GAA website at a cost of €10 for adults and €5 for students with a valid ID. Under 16’s are free into our games and do not require a ticket. From next weekend Tipperary County Board will also be offering a tap and go service at all venues, so if you are not in a position to pre purchase your tickets you can now pay on entry to the venue with your credit or debit care. Please note that Tipperary GAA will continue to comply with Croke Park guidelines which means cash will not be taken at any venue. Our Tipp GAA TV streaming service continues this weekend. In total this year there will be up to 30 games available to view via our Tipp GAA TV streaming service with the following pricing structure in place, Season pass €120, weekend pass €25 and single game pass €10. You can now purchase your 2022 season pass or desired game in next weekends senior football championship via the following link: https://page.inplayer.com/TipperaryGAA/

The Electric Ireland Minor Hurling team of the year for 2022 was announced this week and Four Tipperary players have been named in the team. The 15 standout performers from the 2022 season has resulted in All Ireland winners Tipp and beaten finalists Offaly make up more than half of the team. 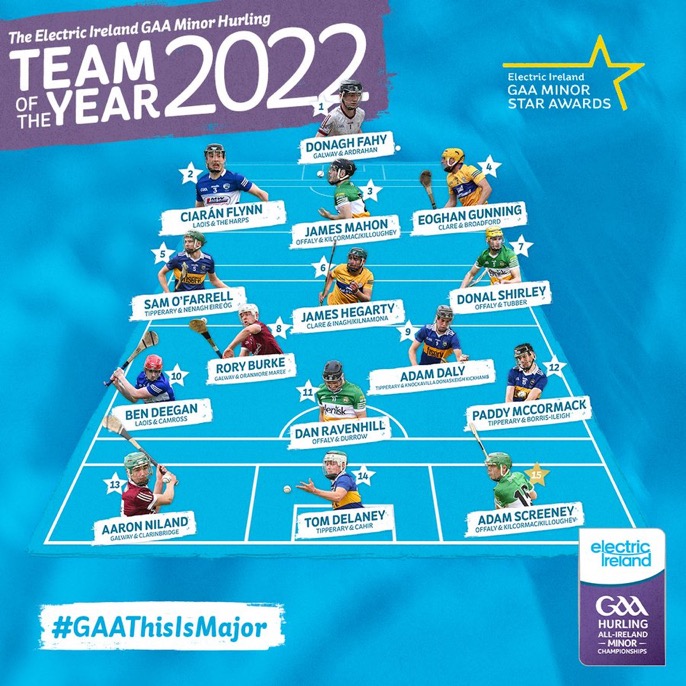 Tipperary captain Sam O’Farrell is named at number 5 on the 2022 Electric Ireland GAA Minor Team of the Year. The Nenagh Eire Óg man led from the back, was calm under pressure and had the ability to score points from play as he helped his side to glory in 2022.

Adam Daly will be remembered for stepping up to take the winning penalty in the Munster Hurling Final to win the cup for Tipperary Adam had a super work-rate throughout the championship as well as great shooting skills, scoring 2 crucial points in the All-Ireland Final. Adam is named at mid field on the team.

At no 12 Paddy McCormack of Borris-Ileigh will be remembered for his heroics in the Electric Ireland GAA Minor 2022 Hurling Final! Paddy scored 1-1 in the game, including a last-minute goal which secured the title for Tipperary.

Tom Delaney seemed to thrive under pressure this season. When needed a score, the man was always able to stand up to the challenge, score points from play and keep the scoreboard ticking, helping his side to victory throughout this year’s championship. Tom has been named at full forward on the team of the year.

After an absence of two years owing to Covid-19 restrictions, the finals of the highly regarded Jim Power Under 14 football tournament took place last month in County Waterford. Such are the great strides being made at development level in Tipperary currently, the Premier County fielded two teams in the competion. Both teams had qualified for the finals by topping their respective groups back in June. Tipperary Blue topped their group which contained Limerick and Offaly in Dr Morris Park Thurles, while Tipperary Gold travelled to Fenagh, Carlow, and claimed top honours in a group including Wexford, Carlow, and Limerick Green. Top spot in their respective qualifying groups placed both Tipperary sides in the “Cup” edition of the tournament proper. 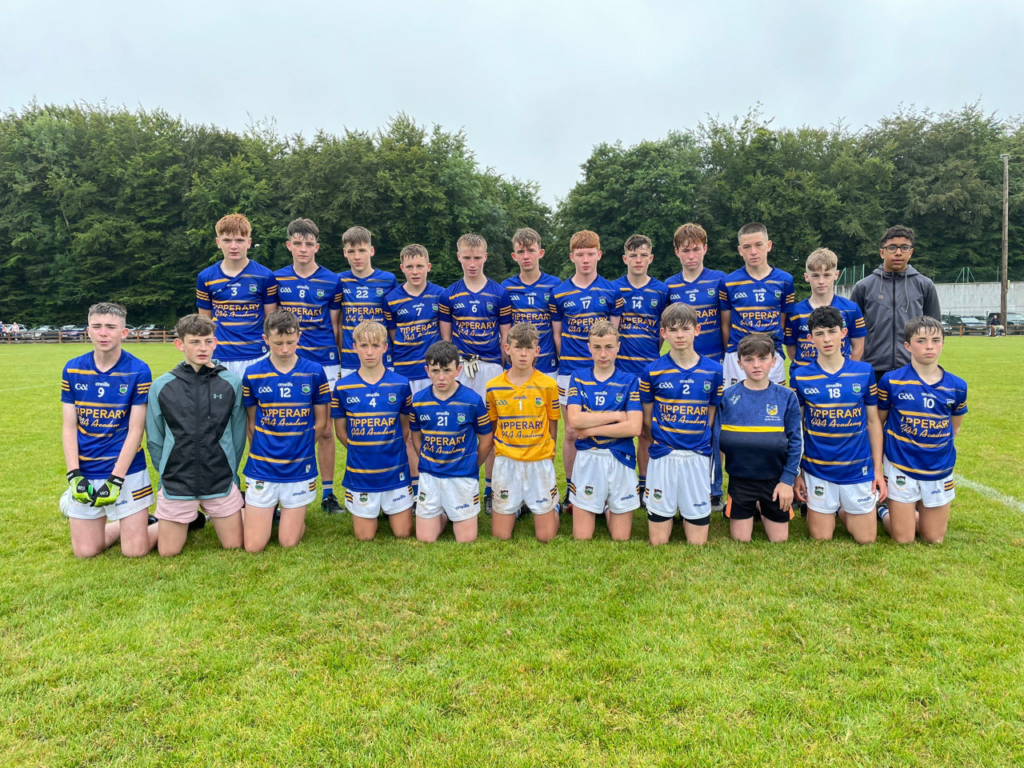 On finals day, Saturday 23rd July, both Tipp teams were hosted by Brickey Rangers, outside Dungarvan. Tipperary Blue took to the field in their quarter-final against Waterford Blue, coming out on top in a keenly fought contest by 2-7 to 2-4. Mullinahone’ Ned O’Meara led the way with an impressive 1-3. Arravale Rovers’ Donnacha Quigley helped himself to 1-01, while Charlie Barrett (Killenaule) and Padraic O’Shea of JK Brackens completed the scoring. Also, Clerihan’s Shane Cooney orchestrated affairs brilliantly from midfield. Tipperary Gold, helped in no small way by captain Paul Cummins’ (Ardfinnan) contribution of five points, accounted for Waterford’s White side by 0-8 to 0-3. Spectacular long-range points from halftime substitute Aiden Gorey and an outside of the boot beauty from Commercials’ Killian Smith illustrated the difference between the sides. This set up an all-Tipperary clash in the semi-final and saw Tipperary Gold overcome Tipperary Blue on a score-line of 5-6 to 1-4. Tipp Gold’s ability to find the net paid great dividends and the fulltime scoreboard was probably a bit harsh on Tipperary Blue who brought a lot to the tournament. Tipperary Gold scorers: Gary Slevin 2-0, Paul Cummins 1-2, Darragh Maher 1-1, Luke McKeogh 0-2, Conor Campion 0-1. Tipperary Blue scorers: Philip O’Dwyer, Harry Lawlor 0-1, Padraic O’Shea 1-1, Shane Cooney 0-1. 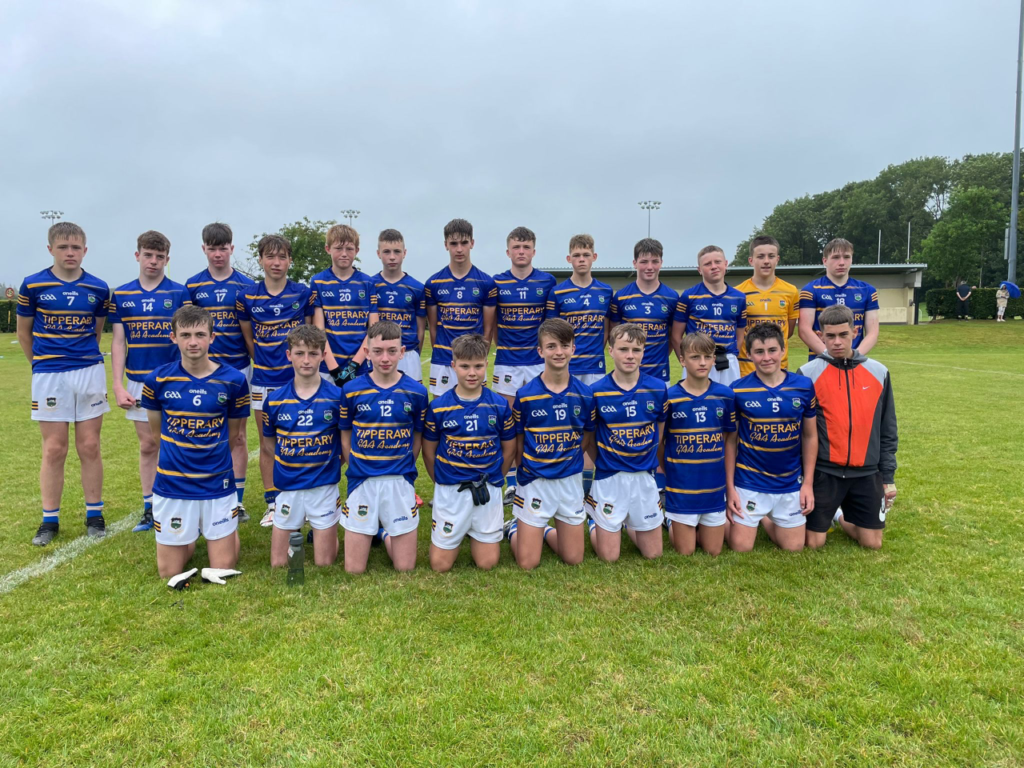 Tipp Gold faced Wexford, who came through after extra-time against Offaly in the final. Extra time exertions may have taken their toll on the Model County, but nevertheless Tipperary Gold produced a stunning performance, taking the “Cup” by 1-10 to 0-3. That said, Tipperary only held a three-point advantage at halftime. Three points from play by Paul Cummins were added to by a point from Durlas Og’s Euan Murray, with Wexford responding with their solitary point of the half. After the break it was a different story, Paul Cummins, a contender for player of the tournament, blasted 1-1 and ended the game as a contest. Dara Maher had a point midway through the half as the Tipperary Gold management gave all substitutes a taste of the action. Killian Smith, Luke Mckeogh and Gary Slevin got on the score board late on. It was Tipperary’s first success in the competion for seven years and richly deserved.

The time has come for GAA clubs and members from up and down the county to dust down the bróga damhsa and the uislisí ceoil, to start rehearsing their songs and recitations and to polish up their novelty act skills.

Many, many days entertainment lie ahead and the aim for many, as well as entertaining their fellow GAA friends, family and neighbours, will be to reach a county, provincial or All-Ireland final and to bring and showcase their talents on bigger stages.

There are eight events/disciplines in Scór that cover all aspects of Irish culture: Figure/Céilí Dancing, Solo Singing, Ballad Group, Recitation/Scéalaíocht, Nuachleas/Novelty Act, Instrumental Music, Set Dancing and Table Quiz. The competition is divided into two age levels, Scór na nÓg, for young people under 17 and Scór Sinsir, for those over 17.

Ballyporeen GAA Club are holding their annual golf classic in Cahir golf club on Friday 19th and Saturday 20th of August and are inviting team entries costing €180 for a team of 3 which includes complimentary dinner in Cahir Park clubhouse.  There is also the option of sponsoring a Tee Box for €50 , with the sponsors name being displayed in a prominent place on the days of the event.

The clubs fundraising activities have been severely curtailed as a result of Covid 19 so this is a major event for the club who would be very grateful of your support. The club would like to thank all those who have supported it over many years and they look forward to this support continuing into the future.