It is with great sadness that Tipperary GAA County Board informs you of the passing today Saturday March 6th of former Tipperary and Kilruane MacDonaghs player and current club president Tom McLoughney. 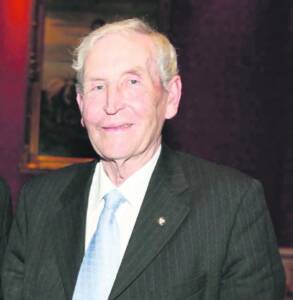 Tom made his League debut with Tipperary in 1959 and went on to win All-Ireland senior medals in 1961 and 1962. In addition, he won 3 Munster medals, 2 National League and 2 Oireachtas Medals. In what was a golden period for the Premier County, Tom wore the number 14 jersey in a lethal Tipperary forward line. On the club front Tom was part of the MacDonaghs teams that won the North finals in 1959 and 1965. A shrewd judge of a hurler, he was a senior selector with Tipperary in 1980 and filled the same role with Kilruane MacDonaghs senior team that won a hattrick of North and County titles (1977-1979). As the first MacDonaghs player to win an All-Ireland senior hurling medal, he was an iconic figure in Cloughjordan parish. Tom was selected at full-forward on the North Centenary hurling team (1951-2001) and he was honoured with a Laochra Gael Award in 2012.

Tipperary County Board Chairman Joe Kennedy said “I am very saddened to hear of the passing of Tom McLoughney, who made a massive contribution to Tipperary GAA, as a player, selector and in latter years a loyal and dedicated supporter of both club and county. Tom was one of lifes gentleman and always a pleasure to meet at games”.

Due to current government restrictions regarding COVID-19 a private family funeral will take place. Requiem Mass for Tom takes place in St. Flannan’s Church, Ardcroney this Monday at 11 o’c followed by burial afterwards in Ardcroney New Cemetery. Those who would have liked to have attended but cannot may view the livestream of his mass on the Cloughjordan Parish Facebook page.