The time is almost upon us, as 4pm on Sunday the 2018 disappointment will be extinguished when a new campaign unfolds. For the last ten months or so, Tipperary players and supporters have been waiting for the opportunity to heal the wounds of an earlier than expected exit from the Munster and All-Ireland Championship.

So, on Sunday next, May 12th, the opportunity arises when the Tipperary hurlers and supporters in their thousands will travel to Páirc Uí Chaoimh for the opening round of the 2019 Munster Senior Hurling Championship against Cork.

A year wiser from last year’s supreme offering, those who wish to dine at the top table will know there is no escape once the platter has been served and who would dare miss a slice of the action?

Tipperary and Cork have met on 86 occasions in championship hurling with only one victory the difference between them. Cork edge the balance on 38 wins to Tipp’s 37. In fulfilling the stats there were also 8 draws and 3 games were unfinished.

We send best wishes to the team and management as Liam Sheedy, Tommy Dunne and Darragh Egan, right, look for a first provincial win since 2016. To do that the support from the stands and terraces will be crucial. Management appeal to all supporters to get behind the side and make sure Tipp are not outnumbered in the stands this Sunday or indeed any Sunday in the championship.

The referee will be Seán Cleere (Kilkenny).

Ticket Information: Stand: Pre-Purchase: €20.00 Match Day €25.00. Terrace: Pre-Purchase: €15.00 Match Day €20.00. Juveniles €5 each.
Senior Citizens/Students (Stand & Terrace) Purchase full price tickets and on the day of the match they can claim a rebate of €5 when they produce appropriate I.D Prior to entry into the Stadium. 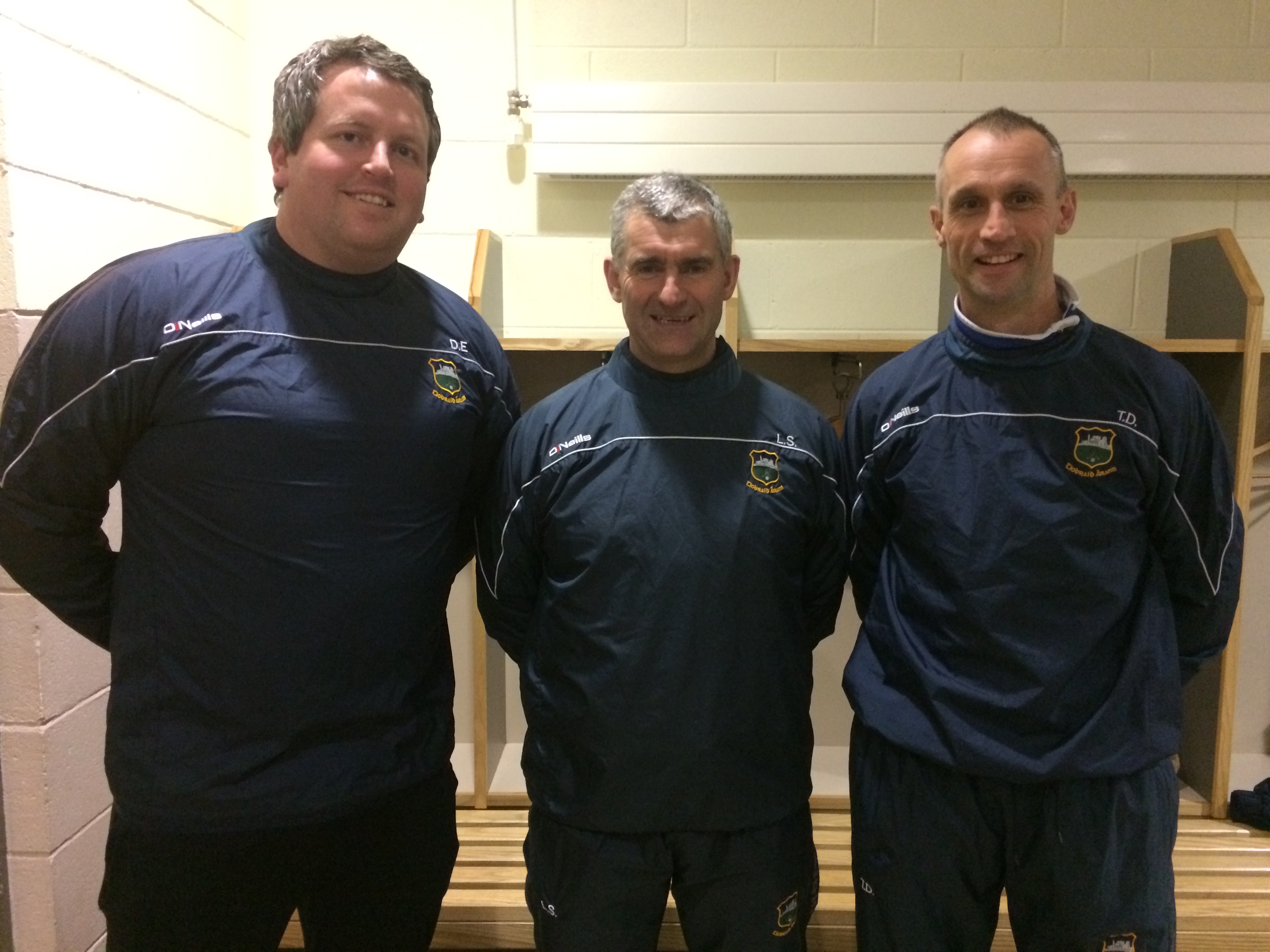 The Munster Senior Football Championship gets underway this Saturday evening, May 11th in Semple Stadium when Tipperary take on Limerick at 7pm in the quarter-final. Hopefully, a successful and productive team performance will be enough to secure the result as Tipperary look to bounce back from earlier league disappointment. Having several key players available who were absent for all or most of the league will be of huge benefit to Liam Kearns and his management team, pictured left, as they strive to plot a course in this year’s championship.

The last championship meeting between the sides in 2014 saw the resurgence of the Tipp senior side as prior to that the last provincial championship win was back in 2003. Seven of the 2014 winning side are still regulars while the then goalkeeper, Paul Fitzgerald, is a current coach/selector.

Here again we appeal to supporters to get to Thurles on Saturday evening and get behind the team as the winners go on to play Cork in the Munster semi-final on June 1st in Páirc Uí Chaoimh.

The game will be preceded by the Munster Intermediate Ladies Gaelic Football match between Tipperary and Limerick at 5pm.

We send best wishes to both teams and managements. The referee for the senior match will be James Molloy. Pre-purchase tickets are €15.00 Match Day €20.00. Juveniles (U16) Free

Senior Citizens/Students – purchase full price tickets and on the day of the match they can claim a rebate of €5 when they produce appropriate I.D Prior to entry into the Stadium. 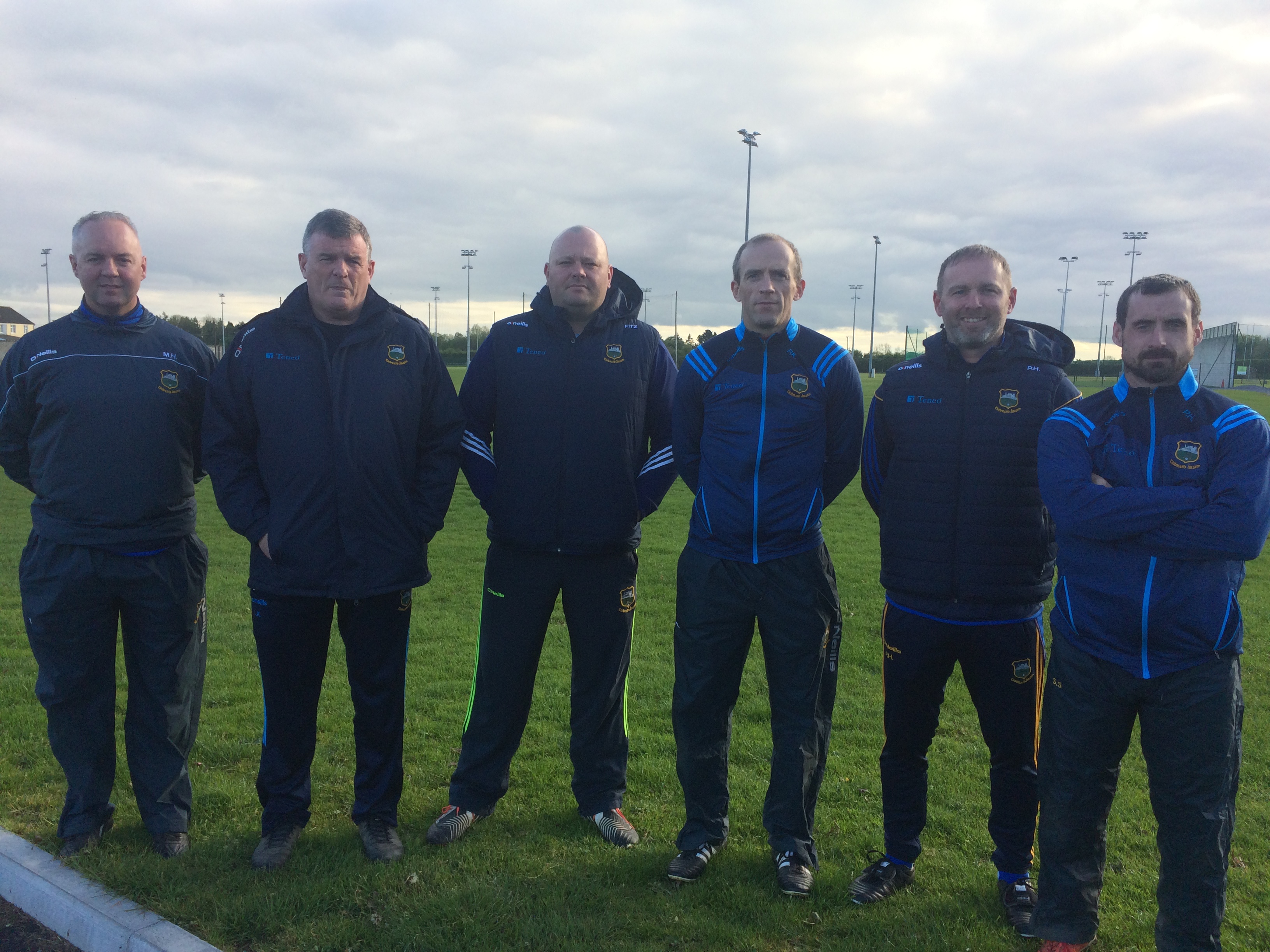 The first of this week’s action for our inter-county teams takes place this Wednesday night, May 8th, when Tipperary will face Clare in the Electric Ireland Munster Minor Football Championship Phase 1 Final for the Darrel Darcy Cup. This game will go ahead in LIT Gaelic Grounds at 7pm.

Having come through the phase 1 rounds with a comprehensive win over Waterford in round 1, the second outing in round 2 against Clare fell below pre-match expectations as Tipp gave way in Ennis. This was followed up with a draw back on home soil against Limerick on the same night Clare lost their final round game to Waterford. So, going into the phase 1 final, Tipperary will be looking to replicate the opening round performance to be in with a chance of getting to phase 2 where Cork and Kerry await.

To do that, the invaluable support from the Mackey Stand in Limerick will be crucial. Our supporters responded magnificently for the round 3 fixture which was very much appreciated by the team and management and now we need our supporters to do the same this Wednesday night.

Looking forward, we send best wishes to the team and management team, in this all-important fixture where the referee will be Sean Joy (Kerry).

Defending champions Tipperary will know they have a significant task on their hands as they head into their opening round 1 fixture in the Electric Ireland Munster Minor Hurling Championship, when they take on Cork in Páirc Uí Chaoimh on Sunday next, May 12th at 2pm.

With the new structure in place it is harder for management teams to gauge where they are at, so it is a case of entering the unknown for all teams going into the first round. For the players it is equally as huge and with that in mind the Tipperary management under Paul Collins and his team have left no stone unturned in terms of team preparation.

Best wishes to the team and management on Sunday where the referee will be John O’Halloran (Limerick). 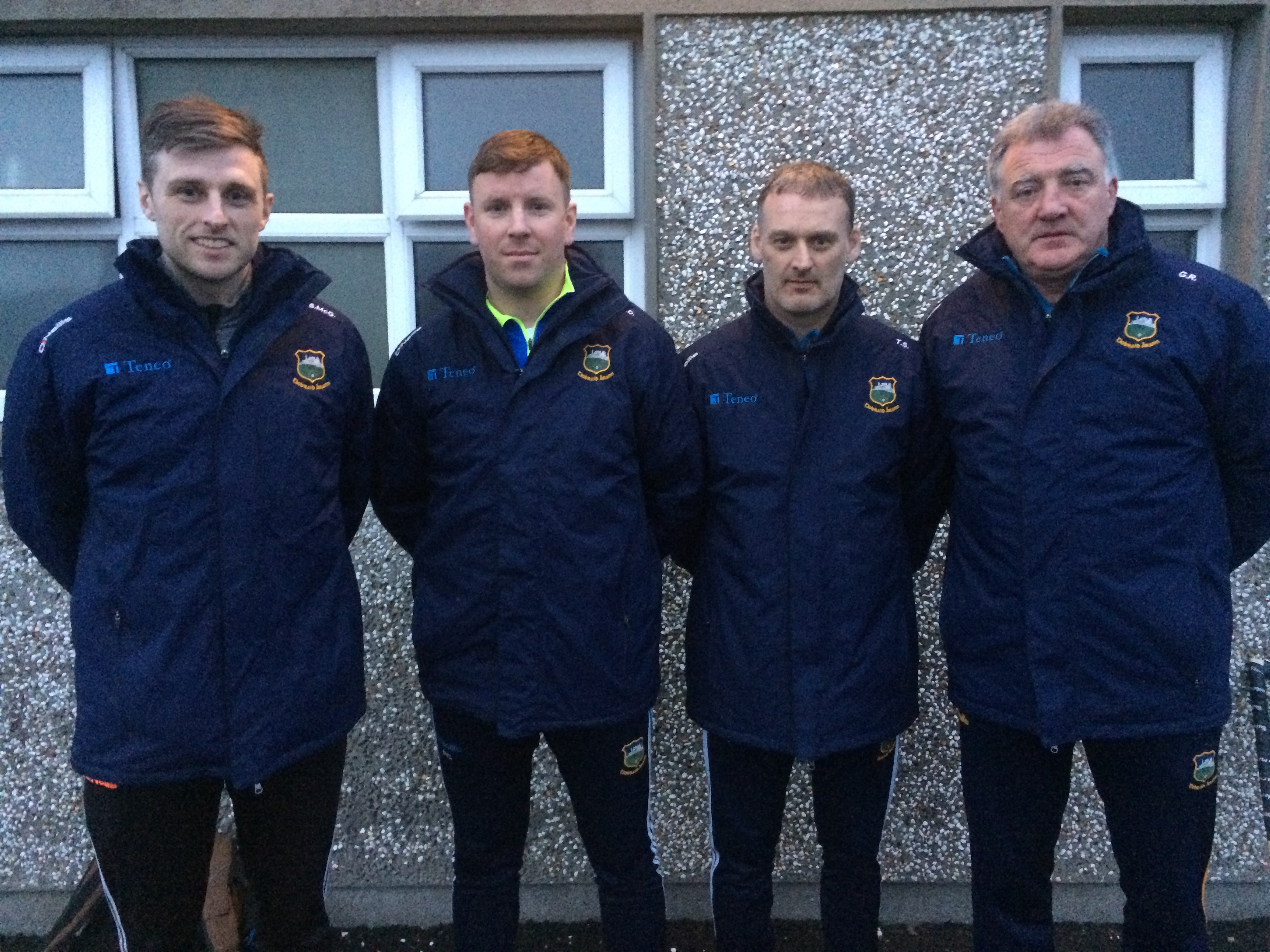 The Tipperary U20 hurlers and Kilkenny played out a lively and highly entertaining match in the Tom O’Hara tournament in Gortnahoe-Glengoole GAA grounds on Bank Holiday Monday, with Tipperary taking the honours 0-25 to 1-19. Darragh Woods (Holycross-Ballycahill) was Tipp’s top scorer with 0-12 (0-9f, 0-1’65).

Best wishes now and for the future to Willie Barrett (Ardfinnan) who has called time on his illustrious career as referee. He refereed his first game for the Co. Board in 1980 and was one of the county’s most decorated and longest serving officials.

Willie indicated that he “was fortunate to be appointed to many great games in the years that followed at every GAA ground in the county which I regarded as a great honour. The greatest legacy I have from refereeing is the many friends I made through refereeing”.

We thank Willie most sincerely for his outstanding contribution and the depth of knowledge and courtesy he brought to the role.

Best wishes to our referees on duty this weekend where John McCormack (Knockavilla-Donaskeigh Kickhams) takes charge of the Electric Ireland Munster Minor Hurling Championship match between Waterford and Clare on Sunday in Walsh Park. While a little further east, Derek O’Mahony (Ardfinnan) is in the middle when Wexford and Louth meet in the Leinster Senior Football Championship at Innovate Wexford Park.

With the county teams in action this weekend, there are some games down for decision this week in the Tipperary Water County Hurling and Football Leagues.

For results of all games and forthcoming fixtures please check https://tipperary.gaa.ie/fixtures-results/

The first draw in the 2019/20 Tipperary GAA Clubs will take place this Friday May 10th in Finn’s Bar, Borrisoleigh. First prize in the new draw will be either a Skoda Karoq or Renault Kadjar or €25k. Second prize will be a Renault Clio or Skoda Fabia or €15k and third prize will be €3,000.

For anyone new wishing to join please contact your local club or the Lar na Páirce office 0504 22702 for more details before Friday week. 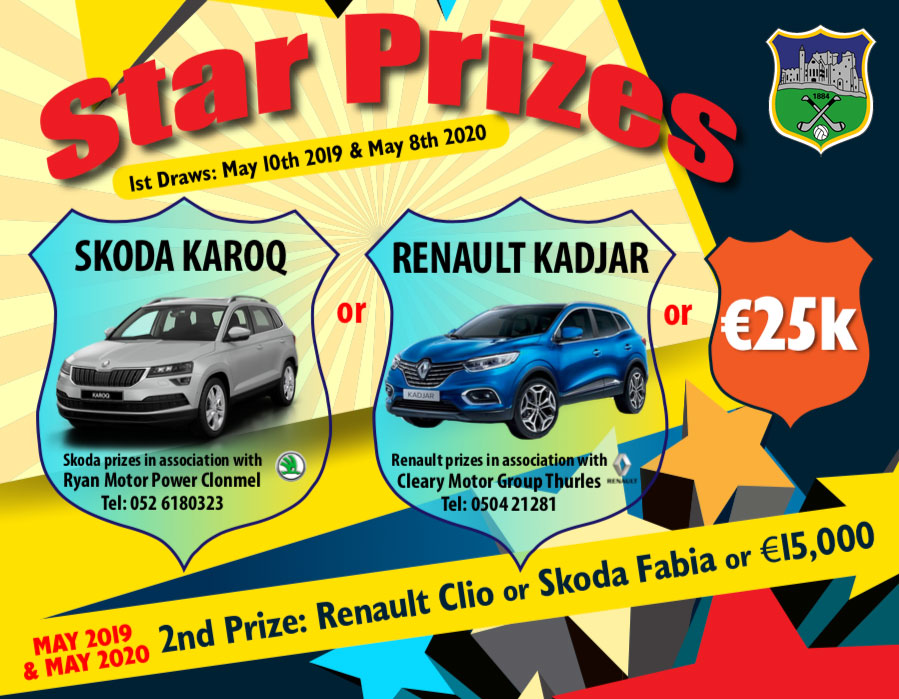 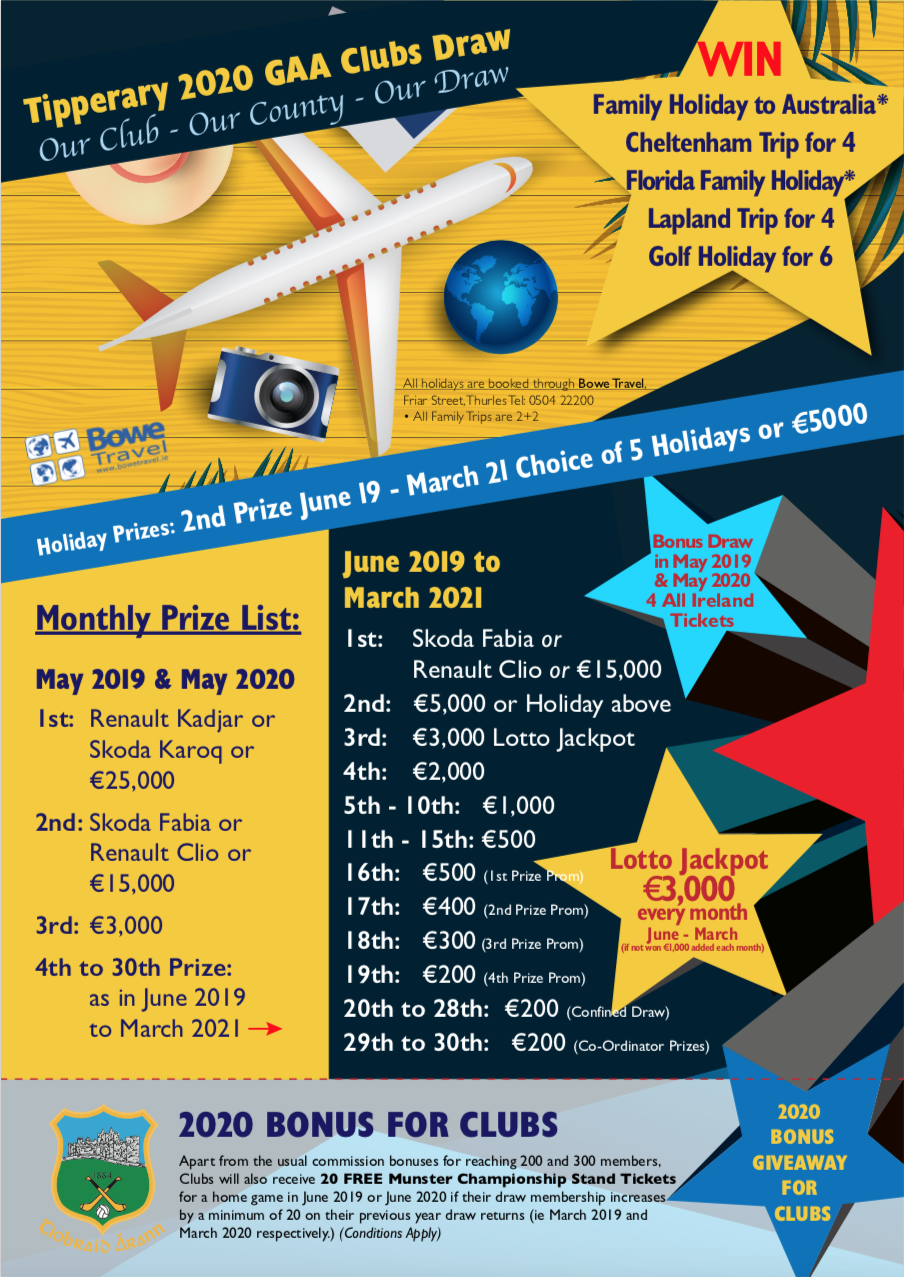 Congratulations to Colaiste Dun Iascaigh who won the U15 (B) Football (Cusack Shield) Final following their 4-10 to 4-7 victory over  Carrick on Suir CBS last Wednesday.

Unfortunately, in last week’s Rice Cup semi-finals both Tipperary schools failed to progress to the final as Nenagh CBS narrowly lost to Kilkenny CBS 4-13 to 4-12 and Thurles CBS lost out to Midleton CBS on a 3-13 to 3-10 score-line.

In the Bank of Ireland Celtic Challenge, Tipperary Gold, comprising U17 hurlers from West and South Tipperary got their Celtic Challenge campaign off to a winning start in Group E with a one point win over Waterford in St. Molleran’s Carrick on Suir last Wednesday night. Their second round game is against Kilkenny Black in the MW Hire Centre Dunmore, Kilkenny on Wednesday 8th May at 7:30pm.

In Nenagh, in Group A, Tipperary Blue consisting of players from the north and mid divisions were defeated by Galway McDonagh 0-18 to 2-8. Their next match will be against Clare Saffrons in Ogonnelloe on Mya 15th.

The Tipperary Supporters Club Annual Golf Classic will take place in Nenagh Golf Club on Friday 17th May and ask for your support for this Annual Golf Classic. The Supporters Club are very appreciative of the generosity over the years and hope you will be in a position to enter a team this year. This is one of their major fund raising events as they continue to support our senior hurling management team in their quest to win Munster and All-Ireland titles. All funds will be used to defray costs for looking after the team preparation for this year’s championship.

Please email team entry to johntierney105@gmail.com or post to John Tierney at 105 Laraghcon, Lucan Village, Co. Dublin. Note: to be eligible for the main prizes, all team members must have GUI handicaps.

For all details please see https://www.tippsupportersclub.com/tipp-supporters-club-golf-classic-nenagh-17-may-2019/

It is still not too late to register for Darkness into Light which takes place on May 11th in aid of Pieta House. The county committee are encouraging as many clubs as possible to support this event.

We express sympathy to the family of the late Michael Cahill RIP, Kilruane MacDonaghs who was one of Tipperary’s best and most respected referees and who was always fair and respectful towards players.

Sympathy also to the family of the late Amanda Stapleton RIP, Borrisoleigh, who captured the hearts of many that shared in her journey through her illness and supported the fundraising Tipperary/Kilkenny charity match last November.

Children are coached in hurling, camogie, football and ladies’ football and some camps offer rounders, handball and fun & run.

The week-long Kellogg’s GAA Cúl Camps are priced at €60, dropping to €55 for a second child and just €45 or a third and any additional children.

Everyone who registers for a Kellogg’s GAA Cúl Camp can enter a competition for a chance to win €5,000 worth of training gear for their team and a €500 voucher for themselves by entering the code from promotional packs of Kellogg’s Corn Flakes or Rice Krispies in store from April or answering a question online. Register online now – gaa.ie/kelloggsculcamps

Ahead of the match on Sunday supporters can join the Tipperary Supporters Club at www.tippsupportersclub.com or by calling Jim Reidy, Membership Officer on 086 3580718.

All members are entered into a prize draw for championship match tickets for all Tipperary Senior games.