Tonight, the Tipperary senior footballers received their division three Allianz National Football League medals, won last April in Croke Park against Louth, in the Clonmel Park Hotel and the sad news was revealed that Aherlow’s Ciaran McDonald, due to ongoing injury problems, has announced his retirement from Tipperary. 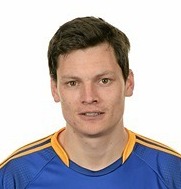 Ciarán made his senior intercounty championship debut in 2008 against Limerick and it was obvious straight away that he was a special talent. A tenacious corner back, his performances for both Tipperary and Aherlow have been extraordinary and one of his proudest moments came in 2010 in Austin Stack Park, Tralee when he led the under-21s to their first ever Munster title overcoming the Kingdom 1-7 to 1-6. In 2014, he represented a successful Irish team in the International Rules series against Australia. His final game in the blue and gold came in the All-Ireland semi-final against Mayo in 2016.

Speaking at the medal presentation tonight manager Liam Kearns spoke very highly of the Aherlow man. He referenced the 2010 Munster under-21 final when, during a break in play, McDonald got down on the ground in front of his marker and proceeded to do a number of press ups and in the process totally out psyched his opponent. “It was his leadership skills that made him stand out” commented Kearns. “Whenever there was a meeting and the players wanted to speak, you may have noticed that I always made sure Ciarán spoke last. That was because what he had to say would leave an impression. There were times when he left us with tears in our eyes”. Kearns went on to reveal that McDonald’s only physical training in the run to the All-Ireland semi-final in 2016 “was done in the pool and on the exercise bike” and yet it was a measure of the man that he was consistently Tipperary’s best defender in those games. “We always put him on the best inside forward and no one ever got the better of him”.

Ciarán was unable to attend tonight’s function and in his place his father Pete accepted a beautiful framed section of photographs of Ciarán taken by John Kelly, Clonmel. 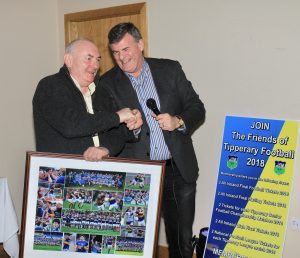 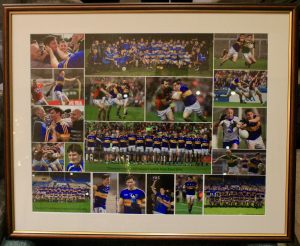