Tipperary defeated Antrim by 2-12 to 0-13 in Round 1 of the Allianz Football League Division 3 on Sunday February 5th at Semple Stadium Thurles.

Report by Jackie Cahill for the42.ie

SECOND HALF GOALS from All-Star Michael Quinlivan and Philip Austin helped Tipperary to gain a winning start in Division 3 of the Allianz Football League.

The Premier County overturned a four-point first half deficit to win by five in front of 722 spectators at Semple Stadium. Both goals arrived following long deliveries from Alan Moloney, with Conor Sweeney providing the assists.
With Tipp a point down, 0-10 to 0-11, Quinlivan’s 56th minute goal was a crucial score and when Austin pounced six minutes from time, the points were secure for the hosts.

But it wasn’t all plain sailing for Tipp, who were 0-5 to 0-7 behind at the end of a disappointing first half. Antrim packed bodies behind the ball and Tipp found it difficult to find a way through, before a more direct approach in the second half paid rich dividends.

Antrim suffered a real blow approaching half-time when lively forward Ryan Murray was black-carded for an apparent hand-trip, a call hotly-contested by the Saffrons. C.J. McGourty came on to score four points but he was also responsible for some poor second half misses.

After Evan Comerford did well in the first half to keep out Stephen Beatty’s palmed effort, his opposite number and Antrim goalkeeper Chris Kerr pulled off a fine save from Quinlivan early in the second half, diverting the ball onto the post.

By then, Tipp had gone ahead for the first time in the game but Antrim – who were 0-7 to 0-3 up in the first half – rallied to lead by 0-11 to 0-9, before the Premier County scored the crucial goals. In stoppage time, Tipp lost captain Brian Fox and debutant Willie Connors to black cards.

With all six subs used, the loss of Connors left Tipp playing the closing seconds a man light. And Antrim were reduced to 14 players when Conor Murray was dismissed for a second bookable offence.

Tipperary opened their Allianz League campaign with a win 2-12 to 0-13 over Antrim today. Here are some photos from today at Semple Stadium. pic.twitter.com/Xd7ROeccOC

The Tipperary football team to play Antrim in Round 1 of the Allianz Football League Division 3 encounter in Semple Stadium on Sunday next, February 5th at 2pm has been announced by manager Liam Kearns.

The captain for 2017 is Brian Fox from Éire Óg Annacarty-Donohill and there is a league debut for Willie Connors (Kiladangan) while Liam McGrath (Loughmore-Castleiney) also gets a debut league start having come on as a replacement in previous campaigns. After taking a year out Killenaule’s Paddy Codd returns to the full back position, as Kearns names a strong team for Tipperary’s opening fixture.

The team lines out as follows; 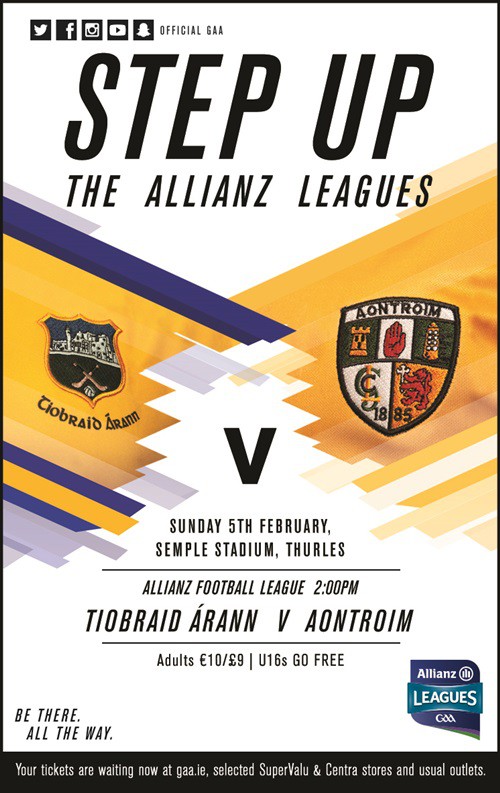