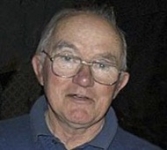 The death has occurred of former Fethard and Tipperary player Tony Newport.
Tony was an outstanding goalkeeper for club, county, and province. He manned the goal for the club from the early fifties to the middle sixties. he retired from inter-county football in 1961 after giving the best part of a decade as the county netminder. He played in goal for Munster in the Railway cup semi-final final in 1955 and lost out to Connacht by a late point. He won county Senior Football titles with Fethard in 1954 and 1957.

A Covid compliant reposal will take place at Fethard GAA Park on Friday from 5pm to 8pm.
Tony will be laid to rest in Calvary Cemetary this Saturday July 31st following a private family mass in the Holy Trinity Parish Church, Fethard.

May He Rest In Peace