Tipperary’s under 20 hurlers made the trip to Pairc Ui Chaoimh last Wednesday where they played a very good Cork side. This was a very even contest all the way through, with only the narrowest of margins between the sides at both water breaks and half time. In the end it was the home side who emerged on top by two points 1-16 to 1-14. While the players and management will be disappointed with the result, they will also know that it could have just as easily went their way and like most close contests it comes down to fine margins in the end. We thank all the players for the tremendous effort they put in all year and it is without doubt that many of them will have a long and distinguished career in a Tipperary jersey. To the management team of John Devane, Ken Dunne, Dan Hackett and Richie Ruth along with their backroom team, we thank them for the huge commitment they have given.

Last week the GAA announced the top 10 Gaelic Football moments of 2020 and it is great to see Tipperary featuring very prominently in the list. At number 10 is Conor Sweeneys spectacular point against Limerick in the Munster semi-final. Limerick were on the verge of securing a second successive Munster SFC win over Tipperary, but Conor Sweeney rifled over a gorgeous point from under the Mackey Stand which took unbelievable Skill and composure in a very pressurized situation. 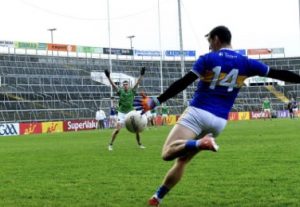 At number 7 was the Tipperary players and management at Hill 16 following All Ireland SFC semi-final. Having just lost to Mayo the Tipperary Players and management very respectfully took the time to lay a wreath on Hill 16 to honor the memory of those who lost their lives in Croke Park 100 years ago. In particular the memory of Michael Hogan was foremost in everyone’s mind.  At number 1 it was Tipperary’s memorable win over Cork in the Munster Final, which saw them bridge an 85 year gap as they captured the title on a very historic weekend as the players adorned the green and white jerseys which were worn by Tipperary 100 years previously on bloody Sunday 1920.

A number of Tipperary players feature in this year’s TG4 Cuil na Bliana top 15 list. Congratulations to Kiladangan’s Bryan McLoughney who was named as the winner of the Cúil na Bliana Iomáint 2020 for his county final winning goal against Loughmore-Castleiney, that saw his side claim the Dan Breen cup for the first time in the club’s history. 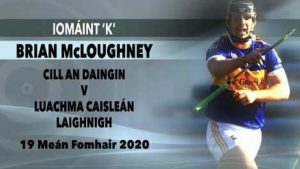 And at number 3 is Jason Forde for his goal against Galway in last March’s hurling league game, when he snuck in behind the defence and finished a pinpoint Cian Darcy pass to the net. At no 13 in the Peil list was Conor Sweeney for his goal in this year’s All Ireland semi-final against Mayo, after fielding a pass outside the 20-meter line Conor dodged a number of defenders before dispatching the ball to the net. At number 6 is Clonmel Commercials Michael Quinlivan for his goal in this years County senior football final against Loughmore-Castleiney. In scoring this goal, Michael displayed skill, speed and determination as he ended a 65-meter run with what was to be the match winning score. Tipperary ladies’ footballers also feature as Roisin Howards unstoppable goal shot against Monaghan was awarded the number 2 spot. The top 15 goals in both hurling and football can be viewed here on the TG 4 player.

The annals of the GAA are full of great ballads recounting great deeds, memorable events, and heroic individuals. Clonmel Óg GAA club have recently launched a music CD in which one of their most loved players Jack Downey is remembered. 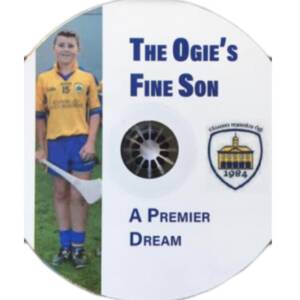 tinged with loss, pain and grief while recalling glorious memories of former days. He ballad gives us a snapshot of Jacks extraordinarily successful sporting life. It was written and sung so movingly by Seán Quirke, Jacks team manager who coached and moulded him from the age of eight and who also is the club president and the club’s county board delegate for many years. Seán visited jack’s grave on one of the brightest, sun drenched days last spring – yet one of the darkest days in the history of the pandemic lockdown. There, in splendid isolation – life – its meaning – its journey and everything about Jack and his final resting place conspire to flood Seán’s head with glorious memories of happier bygone days. Jack was someone who was a shining light amongst his family, friends and club and with that in mind Clonmel Óg will remember Jack by erecting new floodlights around the pitch, with the help of the proceeds from the sale of the CD.

The CD is on sale in digital version for €10 from the Clonmel Óg and Seán Quirke facebook page, it can also be purchased in Clonmel Credit Union and Elys Centra in the old bridge.

2021 will see a defined season for both club and county games, the changes were agreed by central council last week and will also see changes to the format of some competitions in the coming year.

In the Allianz football league, which will run from February 27th to April 4th the divisions will be split into North and South with four teams in each group based on their geography. There will be three games in each group with the top two teams qualifying for the semi-finals. The bottom two teams will play a relegation game with the losers being relegated. These changes mean that Tipperary who play in division 3 will be joined in their group by Limerick, Wicklow and Offaly.

The Allianz hurling league which will be run from February 27th to April 11th will be run on the same basis as previous years, except that there will not be Quarter or Semi-Finals. The division 1 league final will be division 1a winners V division 1b winners, top two teams in all other groups play the relevant league final. Tipperary will be joined in division 1a by Limerick, Galway, Waterford, Cork and Westmeath.

The 2021 Senior football championship will be a Provincial knock-out Championships with back-door qualifier system and Tailteann Cup for teams in division 3 and 4 of the Allianz league whon do not qualify for the provincial final. However, Tipperary footballers will be exempt from the Tailtean cup by virtue of the fact they won the Munster final in 2020.

The Liam McCarthy cup will be Provincial knock-out Championships with back-door qualifier system (as in 2020) but with introduction of relegation to Mc Donagh Cup.  There will be 11 teams in Liam Mac Carthy in 2021 meaning that there will be a preliminary round in the qualifiers between the two defeated Quarter final teams. With the winners progressing to Qualifiers Rd 1 and the Losers into the McDonagh Cup for 2022.

The Under 20 football championship will be a provincial knock out competition and will commence on March 22nd with the All-Ireland final taking place on the weekend of May 2nd. The Under 20 hurling championship will commence on May 22nd and will also be a knockout competition with the Munster and Leinster winners qualifying straight in to the All-Ireland final on the weekend of July 11th.

The Minor hurling and football championships will be played between March 20th and May 23rd and will be decoupled from the Senior championship fixtures. The CCCC will bring forward proposals as to how these competitions should be structured.

All knock out games in the above Championship competitions, will be subject to finish on the day regulations with the exception of the All-Ireland Senior Football and Hurling Finals (Tier 1), which will have Extra time in the original fixture, and will be finish on the day in the event of a replay only.

Well done to JK Brackens club secretary Aoife Percy who along with her colleagues in St. Josephs primary school Templemore, Carol Hassett and Niamh Ryan recently completed a full 26.2-mile road marathon as part of a major fundraising drive to raise funds for two great causes. A sensory area in the school and also the Jack and Jill children’s foundation. To date over €11,000.00 has been raised which is a magnificent achievement.

Starting at the end of January we will be launch a monthly club focus which will aim to highlight the clubs of the premier county in a positive and informative way. Tipperary club focus will feature news from the clubs and in particular, items such as club developments, fundraising activities, and recent achievements. Tipperary club focus will be published in all local newspapers as well as on the Tipperary GAA website. To be successful the new feature will need good quality and informative content which can only be supplied by the clubs, so I am urging all club PRO’s and secretaries to come on board and submit relevant information to pro.tipperary@gaa.ie by the 15th of each month.

As I commence my term of office as PRO, I would like to acknowledge the immense contribution made to the GAA in Tipperary and nationally by my predecessor Joe Bracken who brought the role to an all-new level over the last five years. I hope to continue his great work and the great work of all those who have held this position over the years. If there is anything you feel should feature in this column going forward please feel free to forward it to pro.tipperary@gaa.ie