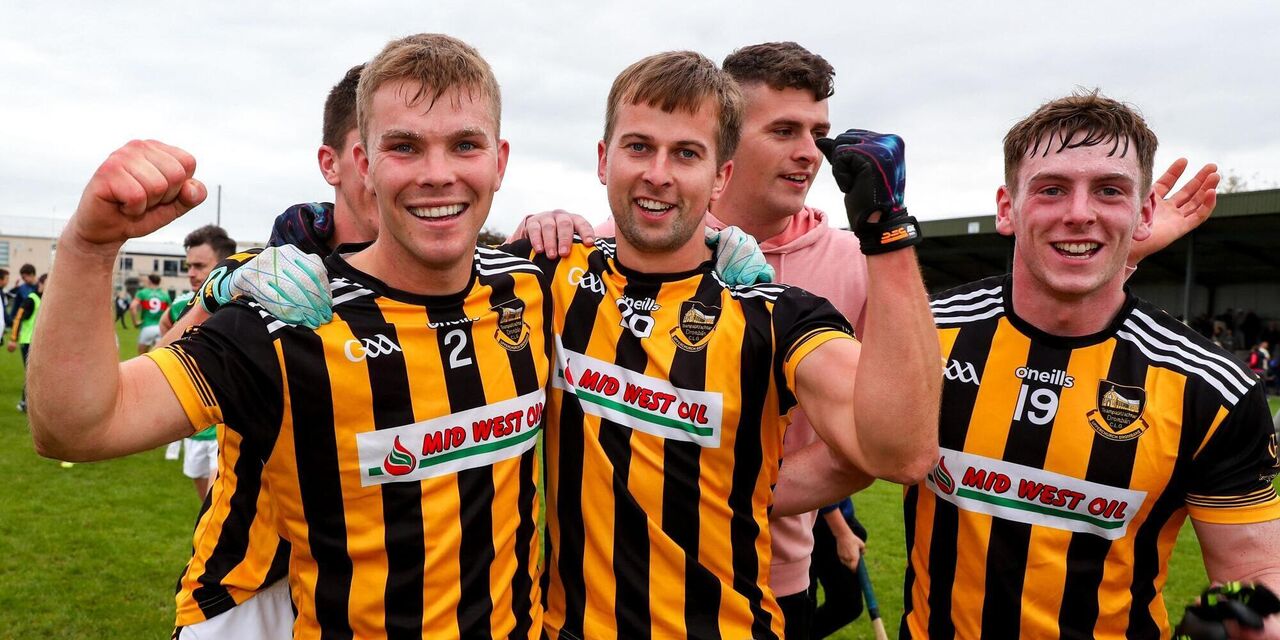 It was football all the way last weekend with games being played at senior, intermediate and junior level. In the senior football championship, both semi finals were played in Golden on Sunday afternoon. First into action were South Tipperary neighbours and great rivals Clonmel Commercials and Moyle Rovers, who were both keen to come out on top in this game and claim their place in the final as well as the local bragging rights. The game was played at a very fast tempo with Moyle Rovers taking an early lead, however Clonmel Commercials made a number of changes at the latter stages of the first half and these changes seemed to settle their team and once they got their noses in front there was always only going to be one result. The Clonmel men ended up comfortable 1-14 to 0-09 winners. In the second semi final, reigning champions Loughmore-Castleiney faced an Upperchurch Drombane side who came in to this game on a high having qualified for the hurling equivalent a week earlier. This game was played at a very fast tempo all through as “The Church” set about laying down a marker and this they did in spades. They were clearly the better team on the day and in fairness deserved to be further ahead at the final whistle. That said Loughmore-Castleiney did have several very scorable chances that they did not take which may have altered the final score. In the end Upperchurch Drombane held their composure and more importantly their discipline under intense pressure to claim an historis win on a score line of 1-12 to 1-11 and qualify for their first ever county senior football final.

In the Intermediate football championship semi finals, Littleton played host to both games on Saturday afternoon. The first game saw CJ Kickhams Mullinahone playing Golden Kilfeacle and it was the South Tipp men who emerged victorious by 0-12 to 1-05, Golden Kilfeacle will be disappointed to have exited the competition at semi final stage once again, but they will also be well aware that registering no score in the second half of the game most certenaly did not help their cause. In the second semi final a very well fancied Grangemockler Ballyneale took on Ballina in what was a well contested game that saw Ballina race in to a 1-04 to 0-02 lead after 15 minutes. Ballina had further extended the advantage at the break, going in to the dressing room ahead by 2-05 to 0-06. The South Tipperary side looked shell shocked and seemed to be struggling to deal with the physical strength of their opponents. Things continued in the same vein in the second half as Ballina held on to their lead and held out for a memorable 2-10 to 0-12 win.

In the Junior A Football Championship there was wins for Sean Treacys over Gortnahoe Glengoole, Clerihan defeated Kiladangan, Thurles Sarsfields saw off the challenge of Solohead while Ballingarry received a walkover from Roscrea-Inane. In the Senior Football relegation Cahir held on to their senior status thanks to a 1-08 to 0-08 win over Aherlow.

Tipperary County Board will also be offering a tap and go service at all venues, so if you are not able to pre purchase your tickets on-line you can now pay on entry to the venue with your credit or debit card but please be aware there may be queues if too many take this option.

Please note that Tipperary GAA will continue to comply with Croke Park guidelines which means cash will not be taken at any venue.

Tipp GAA TV will also be streaming this weekends senior hurling semi finals and you can purchase your streaming pass from the “Watch Live” section of the Tipperary GAA website.

The first draw in the new 2022 – 2023 Tipperary Clubs Draw took place last Friday evening in the County Bar, Thurles and was attended by a large crowd who travelled from all over the county on the night. First prize last Friday was a Renault Arkana car plus 1000 prize bonds and it was won by Kilruan MacDonaghs member Des Gaynor, the second prize of €5000 plus 100 prize bonds went to William Crotty who is a member with the Lattin Cullen club while Gortnahoe-Glengooles Michael and Mary Collins were the lucky winners of the 3rd prize of €3000 plus 100 prize bonds. 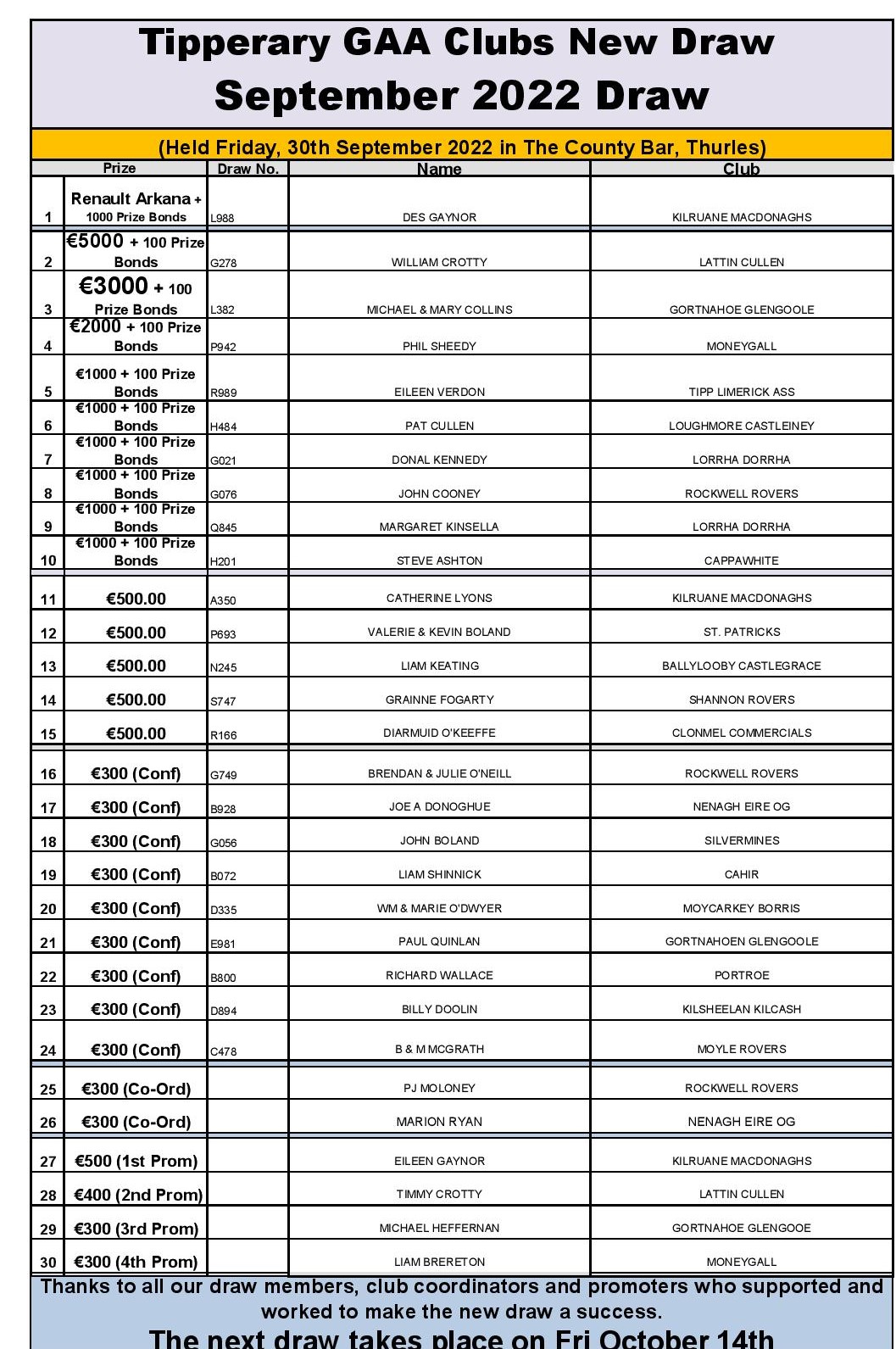 Congratulations to all the winners on the night and a most sincere thanks to each and everyone who has joined the new clubs draw. The next draw will take place on Friday October 14th in The Clough Inn, Cloughjordan and will be hosted by the Kilruane MacDonaghs club.

Newport provided the venue for the much anticipated return of Scór Sinsear to the premier county on Saturday evening last.

Bean an Tí Maresa Floyd did a tremendous job in keeping proceedings on track. First up at 6pm the Tráth Na gCeist was held in the side hall in Newport. Our sincere thanks to Denis Floyd who set the questions and congratulations to the Moyne Templetuohy GAA Quiz team who took the spoils.

On to the main event and even though the clár was small in size the standard of competitions was fantastic. Our winners now go onto the Munster Final and will represent the Premier County. They are:

We wish all our acts the best of luck in Cappamore on Sunday 16th October with the quiz commencing at 4pm and the on-stage competitions at 6pm.

The GAA’s Central Council met recently and have set out their proposed fixture calendar for 2023.

Under the proposal, the new season will begin with All-Ireland senior club football semi-finals in the second week of January with the finals in both codes taking place on 21 or 22 January.

A week later the Allianz Football and Hurling Leagues will begin.

The Sigerson Cup final is down for 15 February with the Fitzgibbon Cup decider three days later.

The next key landmark is the start of the Under-20 football championship, which will not commence until 18 and 19 March at the earliest.

With such pressure on the fixtures calendar, and to allow breathing space between the end of the football league relegation games and the start of the provincial championships, the GAA’s Competitions Control Committee will this weekend request that there are no league finals across the four football divisions, allowing a two-week gap before the start of the championships.

Hurling league finals will take place on the weekend of 1/2 April. The provincial football series will begin a week later.

The new format, if passed at Central Council level, would see both the qualifiers for the Sam Maguire and Tailteann Cup competitions played across three weekends, starting on 18 May.

The All-Ireland football qualifiers are down for the start of June under the proposed new draft.

In hurling, the move to play both the Leinster and Munster showpieces on the same day will attract plenty of debate. If the new plan is adapted the Joe McDonagh Cup final could now take place before the All-Ireland U20 hurling final at the end of May.

The All-Ireland football quarter-finals have been provisionally fixed for the first weekend of July.

The Tailteann Cup final is down for 15/16 July, with the All-Ireland hurling final taking place a week later. Under these proposals the All-Ireland football final will move from 23 to 30 July.

The first weekend in August would facilitate a hurling final replay and also signal the start of county championships across the country. From week 32 until week 51, with the hurling semi-finals ending the season, the club championships will dominate the calendar.

For expert advice and information on maintaining mental fitness click on

Clubs might also be interests in the Little Things Mental Health Campaign run by the HSE which focuses on the how a simple gesture like a smile or wave can brighten someone’s day. Posters ideal for club notice boards/dressing rooms can be downloaded on

As a nationwide community organization the GAA recognizes the role it can play in supporting the emotional wellbeing of its members and their communities. The GAA Mental Health Charter policy document is designed to help clubs develop supports that promote emotional wellbeing through the Give Respect Get Respect Initiative. All clubs are encouraged to download and adopt the GAA Mental Health Charter.

The GAA’s Play in my Boots packs are designed for players 12+ and coaches. The packs contain information which can help us all work through the stresses we experience or maybe help someone else work through theirs. They also aim to remind the GAA population that maintaining mental fitness requires work and skill development the same way as our physical development. The Charter and Play in my Boots packs can be downloaded through

Tipperary continued their quest for Gold & Silver at the weekend with our Juveniles contesting 6 All-Ireland finals. Loughmacrory in Tyrone, Garryhill in Carlow & Cashel in Tipperary hosted the Finals with Tipperary players in contention for all Ireland honours at all three venues. In Garryhill Lahorna’s Sarah Williams & Clodagh Shinnors were up against Wexford’s Kitty Roche & Amber Cronin. This was a very tight final with the Tipperary girls edging the first game 15/13. Wexford took control of the second and led from the start . They were ahead by 14-6 when Sarah & Clodagh bounced back and with some great serving and determination won the second by 15/14 to claim the All Ireland U14 Doubles title. In the Boys U14 Singles Dean Carey (Ballina) was up against the fancied Conor Doyle from Wexford. Dean stunned the Leinster Champion with a combination of great serving and putting away some great shots to take the first 15/13. The Wexford player was more composed in the second game and showed why he was Leinster Champion and went into a big lead 14/7. The best was yet to come from young Carey with some great serving and saw him putting away some great ball to win the All Ireland final by the narrow margin of 15/14 to the cheers of the travelling Tipperary fans. In the Girls U15 Doubles Katie Mulcahy & Aoife Williams (Lahorna) were up against Jenny Saunders & Mia O Connell from Kilkenny . The Tipp girls were slow to start and lost the first 15/4. They put in a great performance in the second and narrowly lost 15/13. In the Boys U17S Evan Carey Ballina was up against Michael Brennan from Kilkenny. Two very strong competitors gave a great performance in both games and after some great rallies throughout the Kilkenny player came out on top winning 21/7, 21/12. Lucy Gould made the long trip to Loughmacrory in Tyrone to contest the U15 singles final against Caislin Tracey from Tyrone. The Tyrone girl was in top form winning 15/5, 15/5. In Cashel Christine Percy & Ali O Kelly (Lahorna) contested the U17 Doubles Final against Orla Brophy & Eadaoin Whyte from Laois. The Laois girls won this final 21/6, 21/10. Well done to all the Juvenile who reached the All Ireland finals bringing Gold & Silver medals back to their Clubs & County.