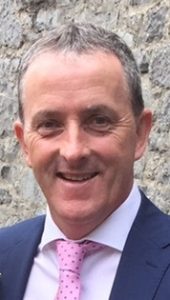 Best wishes to Ballybacon-Grange in the AIB Munster Junior Club Hurling Championship Final against Ardmore (Waterford) on Sunday next, December 3rd in Mallow where throw-in is at 1:30pm in a game which will be referred by Nathan Wall (Cork). As the only Tipperary side to reach a hurling decider in 2017 the hopes of the county will be with them on Sunday.

Congratulations to Thurles Sarsfields on winning the Tipperary Water County Junior B Hurling Championship with a 1-8 to 0-9 victory over Newport on Saturday last.

The first of the Tipperary Water County U21 A Hurling Championship semi-finals will be played on Saturday next December 2nd when Holycross-Ballycahill and Carrick Swan meet at 1.30pm in Golden.

Kiladangan already in the other semi-final will play the winners of the West U21A Final between Clonoulty Rossmore and Cashel King Cormacs which goes ahead in Bansha also on Saturday at 1.30pm.

After the weekend action in the semi-finals of the Tipperary Water County U21 B Hurling Championship Lorrha-Dorrha and Moycarkey-Borris have progressed to meet each other in the final on Sunday next December 3rd in Templederry with a 1:30pm throw-in and extra time will be played if required. Lorrha-Dorrha needed extra-time to eventually overcome Golden-Kilfeacle 0-16 to 1-12 while Moycarkey-Borris eased through with a 5-15 to 1-6 defeat of Cahir.

Congratulations to Toomevara as they claimed the Tipperary Water County Hurling League Division 2 title following a 0-15 to 1-9 victory over Roscrea last Sunday.

Elsewhere, the Tipperary Water County Hurling League Division 5 Final between Ballybacon-Grange and Knockshegowna will now be played on Saturday, December 9th in Templetuohy at 1:30pm.

In the Tipperary Water County Minor (B) Football Championship Semi-Final last week, Kilruane MacDonaghs proved too strong for Cappawhite Gaels winning 6-9 to 0-9 to reach the final where they will play Moyne Templetuohy-Thurles Gaels.

For a full round up on all results and fixtures, please check the Tipperary GAA website https://tipperary.gaa.ie/ or the fixtures/results section in your local newspaper.

Tipperary will take on Laois in an inter-county hurling challenge match on Saturday week, December 9th at 2pm in Kiladangan GAA Grounds with all proceeds going towards Kiladangan NS defibrillator fund and Living Links Ireland.

Entry fee is €10 and children will be admitted free.

The second and final Sunday of round robin games in the inaugural U19 Inter-Divisional Competition will be played this Sunday December 3rd again in Dr. Morris Park, commencing at 11.00am with the third round fixtures – South v North and Mid v West. The Cup and Shield Finals throw-in at 12.15pm with the top 2 teams competing in the Cup Final and the bottom 2 teams contesting the shield final.

Best wishes to Thurles CBS who play St. Kieran’s Kilkenny in the All-Ireland Junior A Under 16.5 Hurling Final this Saturday December 2nd in The Ragg at 2pm.

There was a surprise in store for four members of the Laochra Gael Committee who themselves have given unfailing service and have been tremendous ambassadors for their county down the years and through their role in organising the Laochra Gael awards each year are rightly recognised for their achievements and congratulations therefore also go to John Costigan (JK Brackens & Clonakenny), Seamus King (Cashel King Cormacs), Noel Morris (Borrisokane) and Sean Nugent (Kilsheelan-Kilcash).

Michael O’Brien expressed thanks to the committee and the county board on behalf of all recipients.

Halla na Feile Cashel will be the venue for the County Final of Scór na nÓg on Sunday next December 3rd at 2pm. Congratulations to all our divisional winners and all competitors who took part and we look forward to an excellent final as we showcase the best of talent once again. Go mbeidh rath oraibh go léir.

Our appreciation to all Scór personnel who entertained at Laochra Gael in the Dome on Sunday last, your contribution was much appreciated agus Tréaslaimid leis na Laochra go léir as an gcontae.

The Tráth na gCeist will take place at half time in Halla na Feile and we urge as many clubs as possible to take part. Any team competition like this should attract many competitors as no one person is asked a singular question. Please contact your club secretary or chairperson if you wish to take part. The challenge is there – bain triail as.

The December Tipperary GAA Draw takes place on Thursday week December 7th in Berties Bar Dundrum at 10pm in conjunction with the West Board Convention on the same night in Dundrum GAA Centre. Knockavilla Donaskeigh Kickhams will host the draw and the first prize is a Skoda Octavia.

We express sympathy to the wife and family of the late Tom Keane RIP. Tom played minor and senior football for Annervale Rovers in 1942 reaching the South Finals in both competitions. He helped St. Patricks to South and Co. Senior Football Championships in 1947 and 1953.

For several years Tom lined out for the Tipp junior and senior footballers and was honoured by the Munster football selectors from 1949 to 1952 winning an inter-provincial railway cup medal in 1949. In 2000 Tom was honoured with the South Tipperary Footballer of the past award and in 2004 he received a Co. Tipperary Sean Gael Award.

The Tipperary Supporters Club will launch their 2018 Membership Scheme this Friday, December 1st. The 2018 membership pack includes the following benefits:

Tipperary GAA has launched a loyalty CashBack Card which as a Tipperary supporter each individual that registers is doing their small bit in support of the county cause. Loyalty cards were sent out with club draw receipts to all members and as there is no charge in registering you can opt in immediately. If anyone who doesn’t have a loyalty card and flyer please call to Lár na Páirce to pick up one. Register as per details on the CashBack flyer. To activate the card, holders must complete the registration and then please email, post or drop off your registration details to Lar na Páirce, Slievenamon Road, Thurles or secretary.tipperary@gaa.ie