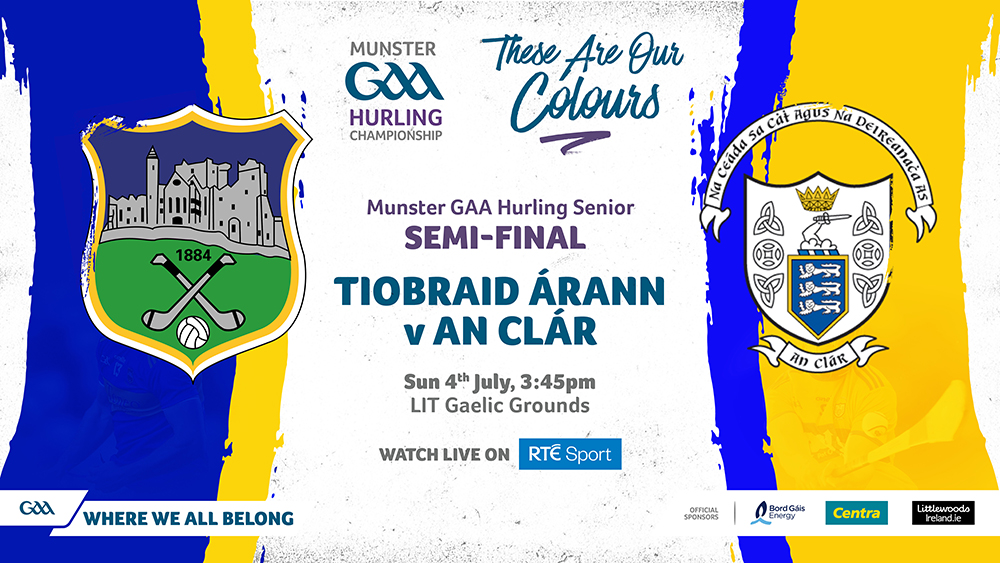 We wish all the players and team management the very best of luck in what promices to be a very tough challenge on Sunday. 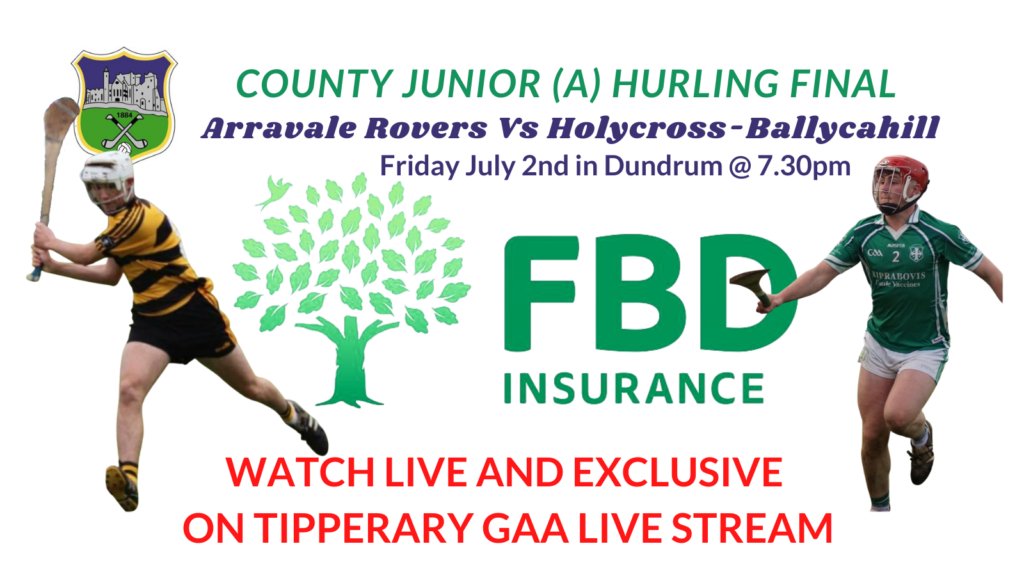 Tipperary GAA will live stream both the Junior A & B Finals this weekend with a special 2 for the price of 1 offer in place.

The finalists of the 2020 FBD Insurance Junior A and Junior B hurling championships were decided last weekend with all remaining semi finals taking place. In Junior A, Holycross-Ballycahill proved too strong for Grangemockler Ballyneale as they won on a score line of 3-18 to 0-12. By virtue of this result, the Mid Tipperary side will now play West representatives Arravale Rovers this Friday July 2nd in Dundrum at 7.30pm. In the B competition, both semi-finals were played last Saturday. In Cashel, Gortnahoe-Glengoole had two points to spare over Cahir as they won by 0-15 to 0-13. In the second semi final which was played in The Ragg, Cashel King Cormacs emerged victorious by the narrowest of margins as they overcame Silvermines by 1-10 to 2-06. The final of the competition will take place this Sunday, July 4th at 12.30pm in Holycross. With spectator numbers still limited, entry to both this weekends finals will be by ticket only but if you don’t have a ticket for this weekends finals you will be still able to see both games live and as they happen. Tipperary GAA are delighted to announce that the FBD Insurance Junior A & B Hurling Finals will be live streamed and you can purchase both games for just €10 in total. This special 2 games for the price of 1 offer will be available through the Tipperary GAA website from Thursday.

The final of the 2020 FBD Insurance County Under 21 B Football Championship between Ballina and Upperchurch-Drombane took place in Dolla on Saturday last. In what was a most entertaining game, both sides played some very skilful football and showed great passion and pride in the jersey on their backs. In the end it was the North champions who emerged victorious by virtue of a 1-10 to 1-08 scoreline. The game was refereed by David Grogan of Aherlow, who we congratulate on a fine performance.

In preparation for the commencement of the Munster Minor Championships next month, The Tipperary Minor Hurling and Football panels have been named by the respective management teams. First into action on July 14th will be the Tipperary Minor Hurlers, who will play Kerry in the LIT Gaelic Grounds at 7.30pm.

The 2021 Tipperary Minor Hurling team will be Captained by Ronan Connolly of Cashel King Cormacs, while Philip Hayes of Durlas Óg has been named as Vice Captain.

The Tipperary Minor Footballers will start their Munster Championship campaign on July 21st when they will play Limerick in the LIT Gaelic Grounds at 7.30pm.

Manager Johnny Nevin along with his management team of Peter Creedon, Christopher Ryan and Adrian Cooke have named the following panel ahead of the game:

The Tipperary Minor Footballers will be captained by Sean O’Meara of Grangemockler Ballyneale for 2021.

We wish both panels and their management the very best of luck in their quest for success in 2021.

Ahead of both their opening games in the 2021 Munster Under 20 Championships, The Tipperary panels for the forthcoming campaign’s have been named.

The Tipperary Under 20 hurlers will take to the field for their Munster Championship Quarter Final against Waterford on July 12th at 8.05pm and manager John Devane and his management team of Richie Ruth, Dan Hackett and Ken Dunne have named the following panel:

Last weekend saw a total of 22 games played in the County hurling leagues and resulted in the following scorelines:

Make-A-Wish grants the wishes of children with life-threatening medical conditions such as cancer, cystic fibrosis and heart conditions. No two wishes are alike, because no two sick children are alike – from the humble to the seemingly impossible!

Since 1992, Make-A-Wish has granted wishes for more than 2,600 brave children across Ireland. A wish granted is true magic for the child, providing respite from their normal routines of hospitals, doctors and treatment. A wish granted provides joy and hope for the children and their families and can create lasting memories of happier times. Make-A-Wish Ireland does not receive any government funding and relies on the generosity of the Irish public to continue granting wishes.

Many young boys and girls are not lucky enough to be able to experience some of the things we all take for granted in life. I want to do what I can to help make someone’s dreams and wishes come true. That is why, during the month of July I will be taking on the Make A Wish Foundations “Wheels For Wishes” Challenge and cycling a total of 250km. I would be very grateful if you could support this great event and make whatever donation you can and in turn help make someone’s dreams and wishes come through.

The 9th draw of the 2020 – 2021 clubs draw took place last Friday evening in Thurles. The top prize of a car or €15,000 was won by the Moyle Rovers club, second prize of a €5000 holiday voucher went to Paddy Coleman who is a member with the Ballina handball club, while €2000 was won by Gortnahoe-Glengoole’s Timothy Crowe. The lotto jackpot of €3000 was not won and so will mean that next month’s jackpot will be €4000. Congratulations to all the winners, a full list of which can be seen on the Tipperary GAA website. The next draw wil;l take place on July 18th and will be broadcast live on Tipp FM from 8.30pm

Nenagh and Ballina-Killaloe are joining forces for the month of July to host their first Virtual Dementia Café.

Join us at our inaugural Virtual Café on Tuesday 13th July 2021 at 11am with your cup of tea as we hear from Aifric Devane, our speaker for this month.

Aifric is a candidate Advanced Nurse Practitioner and Public Health Nurse, in addition to having a Postgrad in Dementia and is a Dementia Champion, and has many years of experience supporting people whose lives have been affected by dementia. 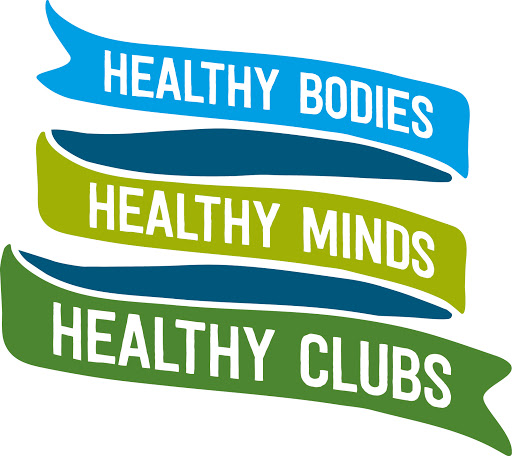 The theme for this month is person-centred care and services that are available to people living with dementia, along with the importance of communication in dementia.  Aifric will be encouraging discussion and questions from our virtual café customers.

For the moment, the cafés will be held online; to join, please email ballinakillaloe.dementiacafe@gmail.com to get the link to Zoom.

July is Sarcoma Awareness Month.  There are two types of Sarcoma Cancer, Bone Sarcoma and Soft Tissue Sarcoma.  This is a very rare cancer and research is continuing to fully understand how these cancers develop and how best to diagnose and treat them.

Further information can be found on the Cancer Society Webpage:

Water Safety Ireland will mark World Drowning Prevention Day on July 25th.    Through its website Water Safety Ireland has developed an Educational Pack with practical advice and videos from early childhood upwards covering all aspects of water safety.  Find out more on this valuable information by visiting: Watersafety.ie 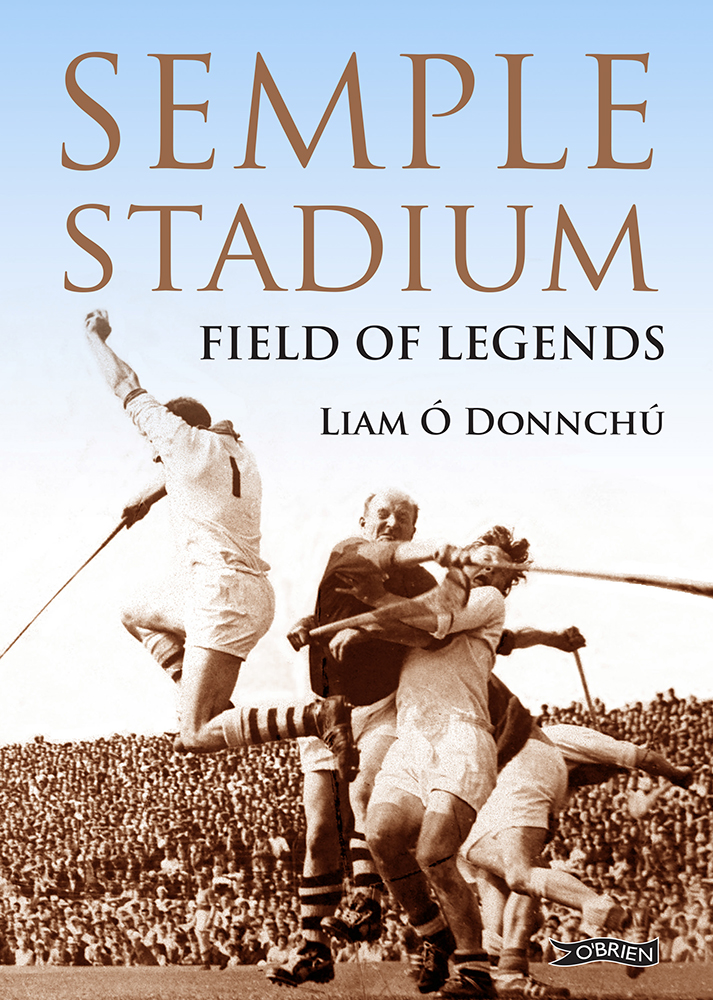 Well known voice of Semple Stadium for many years Liam Ó Donnchú has been very busy of late putting together this wonderful book that captures everything there is to capture about the field of legends. This illustrated history of the stadium begins in 1884 when GAA was first founded in Thurles and chronicles the opening of Semple Stadium in 1910 right up to the present day, featuring all its great days: from the development of the stadium, major games that were played there, significant players and managers, broadcasting from the grounds, the work of the groundsmen, other events held at the stadium over the years, personal recollections and accounts of this place where legends are made. Richly illustrated by archive photographs and ephemera. The book will be out this September, and it’s available to pre-order now from Easons: https://www.easons.com/semple-stadium-liam-o-donnchu-9781788492287

Tipperary Supporters Club are asking for your support for this their Annual Golf Classic which will be held in Thurles Golf Club on July 21st.The Supporters Club are very appreciative of the generosity over the years, and hope clubs and businesses will be in a position to enter a team this year. This is one of their major fundraising events as they aim to continue to support our Management Team in their quest for success on the field. All funds raised will be used to defray costs for team preparation for this year’s Championship. If you are not in a position to enter a team but would like to support the event you can also sponsor a Tee or Green. On the day there will be six team prizes as well as prizes for nearest to the pin and longest drive. When you are finished your round, you can relax and enjoy a four course dinner in the splendid club house.

Note: to be eligible for the main prizes, all team members must have GUI handicaps). More details about this event can be got from any officer of the Tipperary Supporters Club.