Last Sunday saw the conclusion of both the Hurling and Football leagues for our Tipperary teams. Our hurlers were in Walsh Park in Waterford where they took on the hosts in a game that would have seen Tipperary top Division 1 A had they been successful, however on the day it was not to be as Waterford emerged victorious on a full time score of 2-29 to 3-21.

Our footballers made the trip to the midlands where they played Longford in Glennon Brothers Pearse Park in a relegation play off game. Again there was no luck as Longford put in a very strong second half performance that saw them emerge victorious meaning that Tipperary will now play in Division 4 of the football league in 2022.

The focus now turns to the forthcoming Munster championship for both sets of players and their management teams. First into action on July 4th will be our senior hurlers when they will play either Clare or Waterford in a semi final clash. The game will be played in either Pairc Uí Chaoimh or the Gaelic Grounds depending on the opposition. The Tipperary senior footballers are also drawn in a Munster semi final where they will play the winners of the Quarter Final clash between Clare and Kerry on July 10th this game will take place in either Semple Stadium or Cusack Park Ennis at 7pm. All of our county teams have a full schedule of training and challenge games over the coming weeks in preparation for their respective Munster championship games.

Last weekend saw the commencement of the 2021 County hurling leagues and in total there were over 20 games played, all of which were highly entertaining games. All the host venues should be commended and thanked for their efforts to ensure that everything possible was done to comply with current restrictions and public health guidelines. Next weekend will see the commencement of the County football leagues and in total there are 6 games schedules to take place. There will also be games in group 2 and group 4 of the County hurling league. 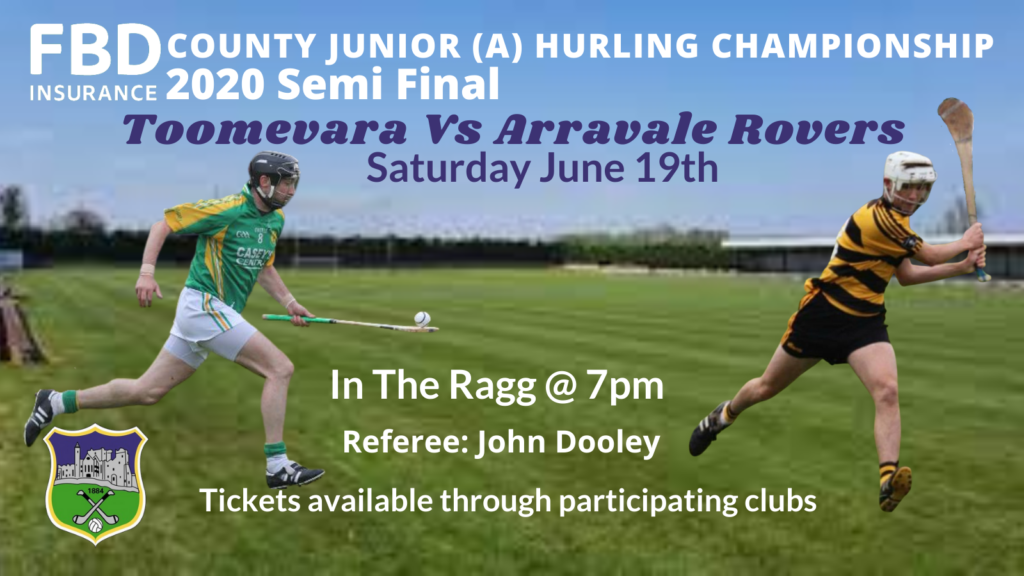 Also next weekend the semi final of the 2020 County Junior (A) Hurling Championship will be played. This game pits North Champions Toomevara take on West Tipperary representatives Arravale Rovers. The game will take place in The Ragg on Saturday at 7pm with John Dooley in charge of the whistle.

Once again this will be an all-ticket event, which will be available through both participating clubs.

Help your Club to receive a brand new AED

The GAA are participating in the Community Heart Program to assist in raising the funds required to enable the placement and upgrade of existing AED’s, or automated external defibrillators, in every Club. An AED is used to help those experiencing sudden cardiac arrest. It is a sophisticated, portable, easy to use medical device that can analyse the heart’s rhythm and, if necessary, deliver an electronic shock, or defibrillation, to help the heart re-establish an effective heart rhythm. These machines have proven to be invaluable and have saved the lives of many people over many years now, The importance of having quick access to an AED was brought back in to focus last weekend when a high profile sports star collapsed on the field and were it not for the availability of an AED at the venue the player in question would most likely not have survived. 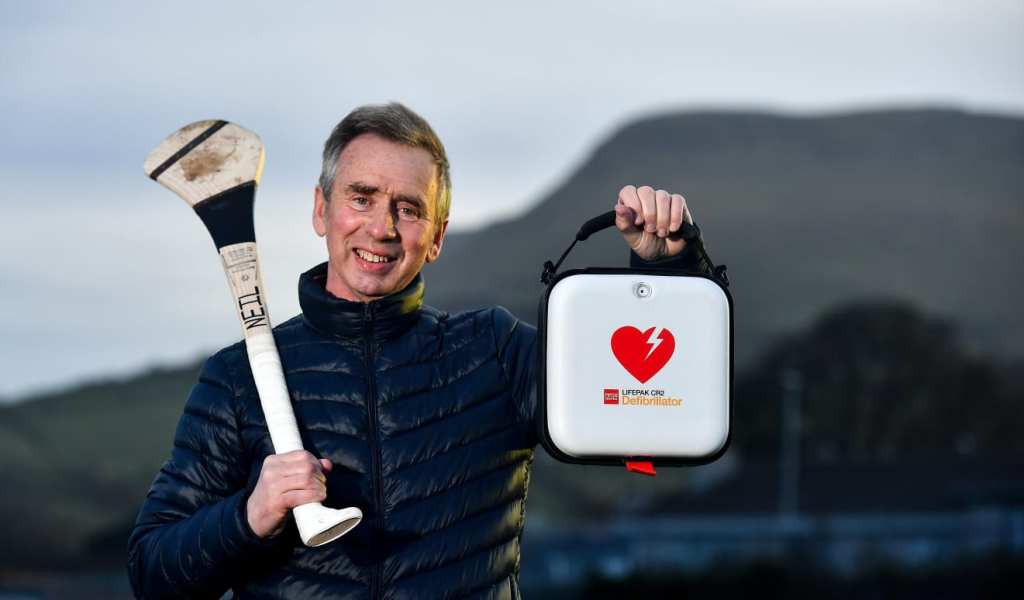 Hugh McManus, father of Antrim hurler Neil McManus, pictured with the Automated External Defibrillator GAA clubs can purchase through the Community Hearts Programme. Hugh’s life was saved when he was treated with a defibrillator after suffering a cardiac arrest in his home in 2015.

The Community Heart Program allows not for profit, sporting and other charities across the UK and Ireland to apply for the opportunity to run an online fundraising campaign using Stryker’s white labelled platform to raise the funds required to obtain an AED for their own community. Once approved, the organisation will be given the opportunity to tailor the platform to suit their own branding and organisational requirements. The organisation will then be connected with one of Stryker’s Distribution Partners who will provide delivery of the AEDs in line with fundraising targets being met.

More recently the club understood the need to bring the defibrillator outdoors, so as to provide easier access, when or if it was needed. The club through their healthy club officer, Sarah Devane looked at many options and just as they were about to choose an option, the GAA launched Community Heart Programme in Late March. This included a state of the art Defibrillator and a go-fund-me page for the task. Ballina was in the final stages of a major fundraiser at the time and were slow to enter the Programme.

However in mid April, they joined Community Heart Programme and by the 29th May, Ballina had reached the target of €2,150. This was helped by €1,000 contribution from their Parish & Club lotto.

The club took receipt of the defibrillator at the start of June and are now focusing on getting an appropriate outdoor casing. Ballina have been delayed in launching the clubs entry into the GAA healthy club programme, but will be sure to include details of the Defibrillator when they do.

The Defibrillator Ballina received was a Lifepak CR2 (3G/Cellular with Carry Case) https://www.hearts.ie/product/lifepak-cr2-3g-cellular-with-carry-case/ This model sends notifications if Batteries/Pads etc need to be changed.

The club always felt that this was a vital piece of equipment in the club, but in light of the events of Saturday night in Copenhagen, it fully re-enforces that view. Ballina GAA Club also would encourage every club and community that has a defibrillator to check it regularly. They  also feel that every club should shout loudly within their community, that a Defibrillator is available at your club grounds. The clubs of Tipperary and Ireland are the heartbeat of every community and maybe we can help keep someone’s heart beating in our community’s.

Former Tipperary hurling star and Silvermines legend, Jim Keogh recently celebrated his 70th birthday and although the occasion could not be marked with a large celebration which such a milestone would have seen in normal times, many of Jim’s former teammates did take the time to contact him with birthday wishes which he richly deserved. Jim was a member of the Tipperary senior hurling team that reached the 1984 Munster Final only to lose out to Cork in a pulsating encounter. Played on Sunday 15 July 1984 in Semple Stadium in front of a crowd of 50,093, Cork captained by John Fenton claimed the title on a scoreline of 4–15 to 3–14. Regarded at the time as the ‘best ever’, the 1984 Munster final was a fitting game to celebrate the centenary year of the GAA. The Tipperary team that day was as follows: 1. John Sheedy (Portroe), 2. Jack Bergin (Moycarkey Borris), 3. Jim Keogh (Silvermines), 4. Dinny Cahill (Kilruane MacDonaghs), 5. Pat Fitzell (Cashel King Cormacs), 6. John McIntyre (Lorrha Dorrha), 7. Bobby Ryan Capt (Borris-Ileigh) 8. Ralph Callaghan (Carrick Davins), 9. Philip Kennedy (Nenagh Eire Óg), 10. Nicholas English (Lattin-Cullen) 11. Donie O’Connell (Killenaule), 12. Liam Maher (Boherlahan Dualla), 13. Michael Doyle (Holycross-Ballycahill) 14. SZeamus Power (Boherlahan Dualla) 15. Noel O,Dwyer (Borris-Ileigh). On behalf of all Jim’s former teammates and Tipperary GAA County Board, I wish Jim a very happy birthday and many more future birthdays.

Congratulations to Killenaule GAA Club who were one of the lucky clubs to win €1000 in this years national clubs draw which took place last week. A phenomenal total of €1,464,670 has been raised by Clubs through the Draw and all the money raised by clubs through the selling of tickets is retained by the clubs, with the list of prizes provided by Ard Chomhairle. The draw was independently observed by Brian Cormack, Audit & Assurance Director, Mazars.

The GAA has published its GAA Championship Diary for 2021 which can be downloaded in full below.

The entire Championship programme will be run off over 10 weekends and culminating with the All-Ireland Senior Football Final on Sunday, August 29.

The full championship diary can be downloaded via the following link: https://www.gaa.ie/news/gaa-championship-diary-2021/

The GAA Museum Book Club choice for June is Boy Wonder by Dave Hannigan. This is the first memoir choice for the Book Club and it’s a touching account of a 1980s Irish childhood lived through the prism of sport.

Boy Wonder is a collage of Hannigan’s personal memories of standing on pitches, sidelines and in stands. The book deals with tough lessons learned on the parish field, the politics of afterschool football and the euphoria of a trip to Croke Park. It’s a poignant comic memoir about family, sports and the rites of passage that shape every childhood.

Cork native Dave Hannigan is a professor of history at Suffolk County Community College on Long Island, and a columnist with the Irish Times, Evening Echo and Irish Echo. He is the author of several non-fiction books and lives in East Setauket.

Those wishing to get involved with the GAA Museum Book Club can sign up for free at www.crokepark.ie/bookclub. Each month the GAA Museum team will choose a well-known GAA book to read and review and at the end of the month, the museum will host a free online interview with the author, in which members can submit questions and comments. The live chat with Dave Hannigan will take place at 8.30pm on Thursday July 1st.

For those who don’t own or can’t borrow a copy of the book, the GAA Museum Gift Shop is offering a 20% discount on Boy Wonder throughout June. You can purchase online at www.crokepark.ie/shop.