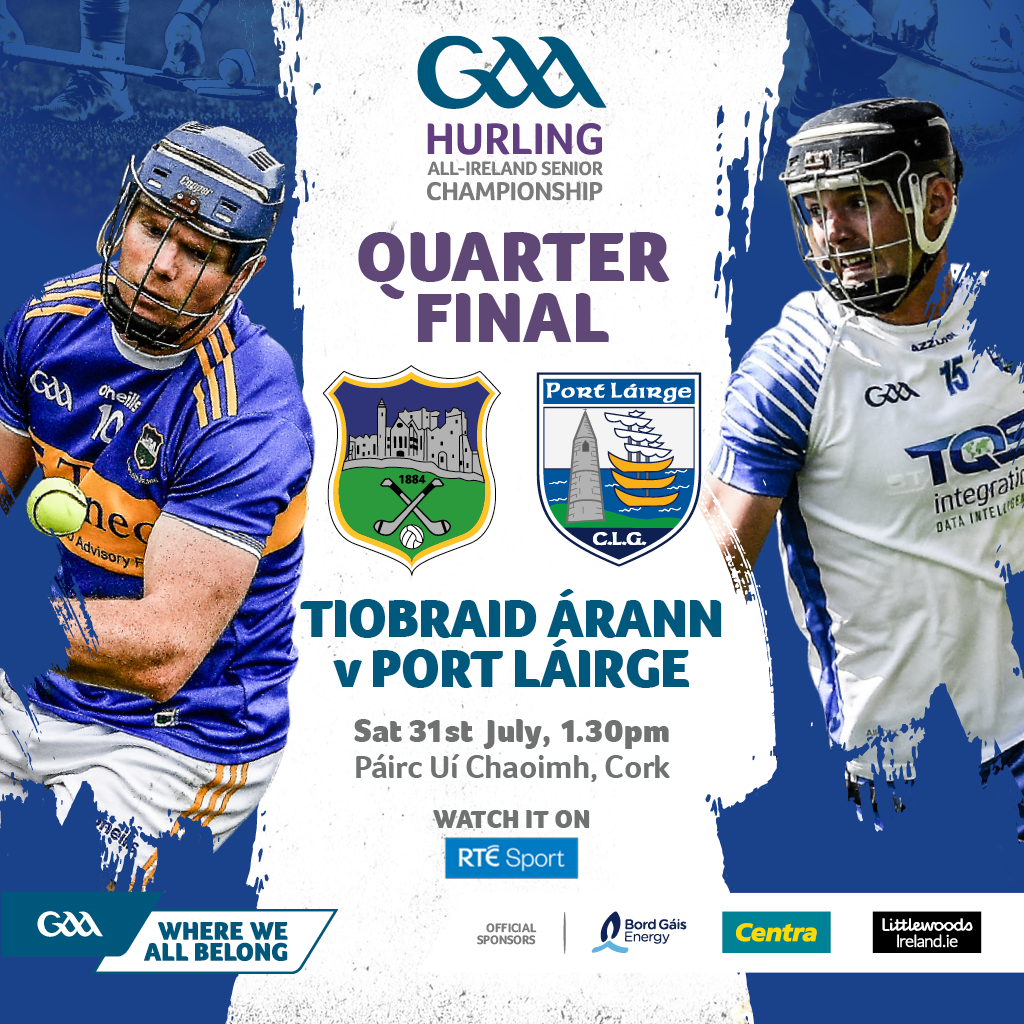 Tipperary’s All Ireland Quarter Final against Waterford will take place in Pairc Ui Chaoimh this Saturday July 31st at 1.30pm. After the disappointment of the Munster Final, the players will be eager to get back to winning ways but it will be a tough assignment as Waterford are flying high on the back of two victories in as many weeks. Saturday’s game is sure to attract a lot of attention and it is expected that Tipperary’s full allocation of tickets will be availed of by our supporters. There have been 45 previous championship meetings of Tipperary and Waterford. The Premier county leads the way with 33 wins to 10 for the Deise and there were two draws. Waterford’s last victory was in the 2008 All Ireland semi final.Since then the eight clashes produced the following results- 2009 Munster Final, Semple Stadium,Tipperary 4.14 Waterford 2.16 -2010 All Irl Semi Final, Croke Park ,Tipperary 3.19 Waterford 1.18, – 2011 Munster Final, Pairc Ui Chaoimh,Tipperary 7.19.Waterford 0.19,- 2012 Munster Final, Pairc Ui Chaoimh, Tipperary 2.17 Waterford 0.16, – 2015 ,Munster Final, Semple Stadium,Tipperary 0.21 Waterford 0.16, – 2016 Munster Final, LIT Gaelic Grounds, Tipperary 5.19 Waterford 0.13, – 2018 Munster Round Robin, LIT Gaelic Grounds, Tipperary 2.22 Waterford 2.22, – 2019 Munster Round Robin ,Semple Stadium ,Tipperary 2.30 Waterford 0.18.We all need to get behind the players and management and show them our support. If you are not travelling to Cork on Saturday, the game will be televised live on RTE, broadcast live on Tipp FM and there will also be minute by minute updates on the Tipperary GAA Twitter feed. Semple Stadium will host the second Quarter Final between Cork and Dublin on Saturday evening at 7pm.

The Tipperary Minor Footballers played Limerick last Wednesday evening July 21st in the Munster Quarter Final. Unfortunately things did not go as planned for the team as they lost by 2-09 to 1-09, Thanks to the players for their commitment and to the team management who have done all they could to prepare the players for this game.

Last Thursday July 22nd saw Tipperary play Cork in the Munster Final and while the result was not what we would have hoped for, the players can be very happy with how they performed and the way in which they kept playing right to the final whistle. A good number of the panel will be eligible again next year and many of the players who will be over age have a bright future ahead of them in the blue and gold jersey.

There were two finals in the county hurling league last weekend and a number of semi finals were also played. In the group 1 final which was played in The Ragg on Sunday, Borris-Ileigh overcame Thurles Sarsfields on a scoreline of 4-18 to 1-15, while in the group 2 final Kiladangan and Moycarkey Borris played a very entertaining game that resulted in a 2-23 to 0-21 win for Kiladangan. 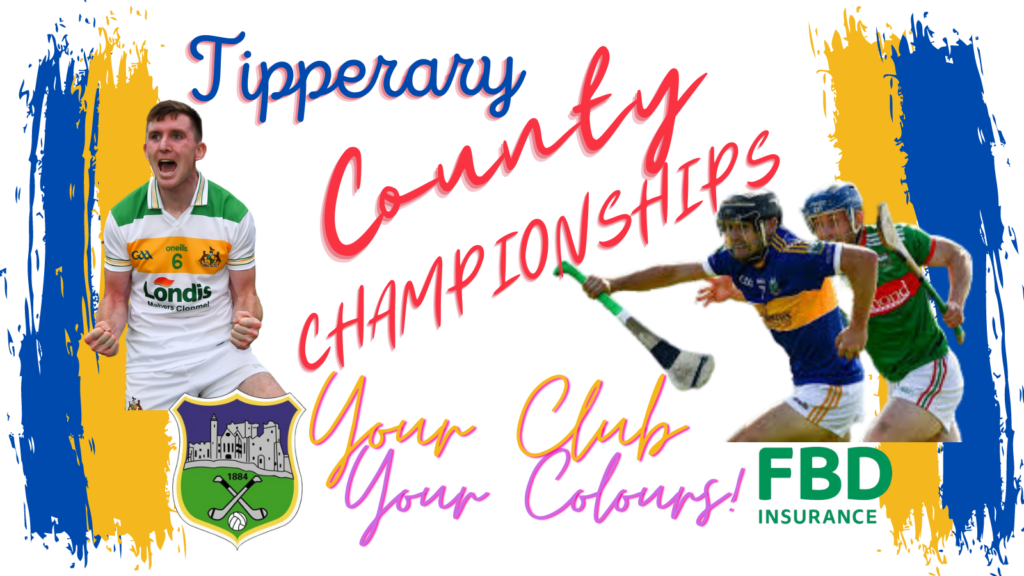 The round 1 draws in the FBD Insurance County senior and intermediate football championships and the Dan Breen, Seamus Ó Riain and Intermediate hurling championships will ] take place this coming Friday evening live on Tipp FM at 6.30pm  and will also be posted on the various Tipperary GAA social media outlets as they happen.

The last draw of the 2020 – 2021 clubs draw will take place this Friday evening at 8.30pm and will be broadcast live on Tipp FM. On the night almost €40,000 in prizes will be won, so tune in and you might even hear your own name being called out.

Although our hurlers will not contest this year’s final which will take place this Wednesday evening, Tipperary will be represented as Thurles Gaels referee Kevin Jordan will be the man in the middle. Kevin has made great progress at inter county level over the last number of year’s and his appointment to referee this game is a reflection on how highly he is regarded. Kevin will be assisted by umpires PJ Bowden, Martin Fitzpatrick, Christy Moore and Dermot Ryan, linesmen Thomas Walsh, Michael Kennedy (Newcastle) and fourth official Nicky Barry. We wish Kevin and his team the very best of good luck. It has also been confirmed that Michael Kennedy will referee this years Lory Meagher Cup Final between Cavan and Fermanagh which also takes place this weekend. Best wishes to Michael and his team on what will be a great occasion for all concerned.

This year’s running of the John West Féile competition will see it initially take place on a county basis, with the age-grade moving to under-15, ensuring children who missed out in 2020 now get a chance to compete for the opportunity to represent their club and county in Croke Park or Semple Stadium at Halloween. 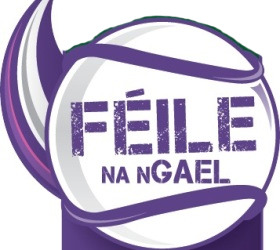 John West Féile 21 was launched last week by John West Féile Ambassadors and inter-county stars, Kilkenny’s Denise Gaule (camogie), Limerick’s Cian Lynch (hurling), Armagh’s Aimee Mackin (ladies football) and Galway’s Shane Walsh (Gaelic football). Féile has brought together thousands of young hurlers, camogie players and Gaelic footballers in a celebration of the GAA’s community ethos through underage competition. This is the sixth year of John West’s sponsorship of what has grown to become one of the biggest underage sporting events in Europe. The 2021 John West Féile na nGael hurling and camogie events, which this year celebrate their 50th anniversary, will take place across individual counties on August 21. The Féile na nÓg football events will take place on August 28. Clubs which are successful in their county Féile can win the opportunity to play in Croke Park over the Halloween period.

To mark the 50th anniversary of Féile na nGael, a special event will be organised in Tipperary in which club representatives from the counties which participated in 1971 will play in a blitz, which will include the opportunity to play in Semple Stadium. This event will take place on the Bank Holiday Monday, October 25.

The GAA’s Officer Development function within the Player, Club & Games Administration Department is keen to continue to promote the suite of online resources available to club officers throughout 2021. Administrator resources can be accessed via the GAA’s Learning Portal here – https://learning.gaa.ie/clubresources

There are 6 broad sections of resources available for Club Officers and Volunteers to assist them in carrying out their roles effectively. The club dashboard is a central hub for a large proportion of the administrative information available to clubs at national level. Up to date guidance and resources are available across area such as Covid-19 Protocols, setting up GAA email addresses, Vetting, the Player Injury Fund, the Player Transfer System and much more. The Dashboard acts in a signpost capacity to direct volunteers to the section where they require further information/guidance. The Club Folder Structure (CFS) is a One Drive structure in place for Club Officers filled with templates, user guides and documents to assist them in their role. Key features of the CFS are:

Profiles, outlining the role and broad responsibilities attached to that role are also included in the online resource hub. This section is particularly useful for new officers or those embarking on a new role, to better understand the basic scope of the role to get them up and running. An updated manual has been uploaded in the recent past. This provides club administrators with detailed information in areas such as communication, the AGM and Club Planning. A specific section on maintaining pitches to the highest standard has also been added recently. This section contains practical advice from experts in the field via recorded webinars to help clubs ensure their playing facilities are kept in pristine condition throughout the season.