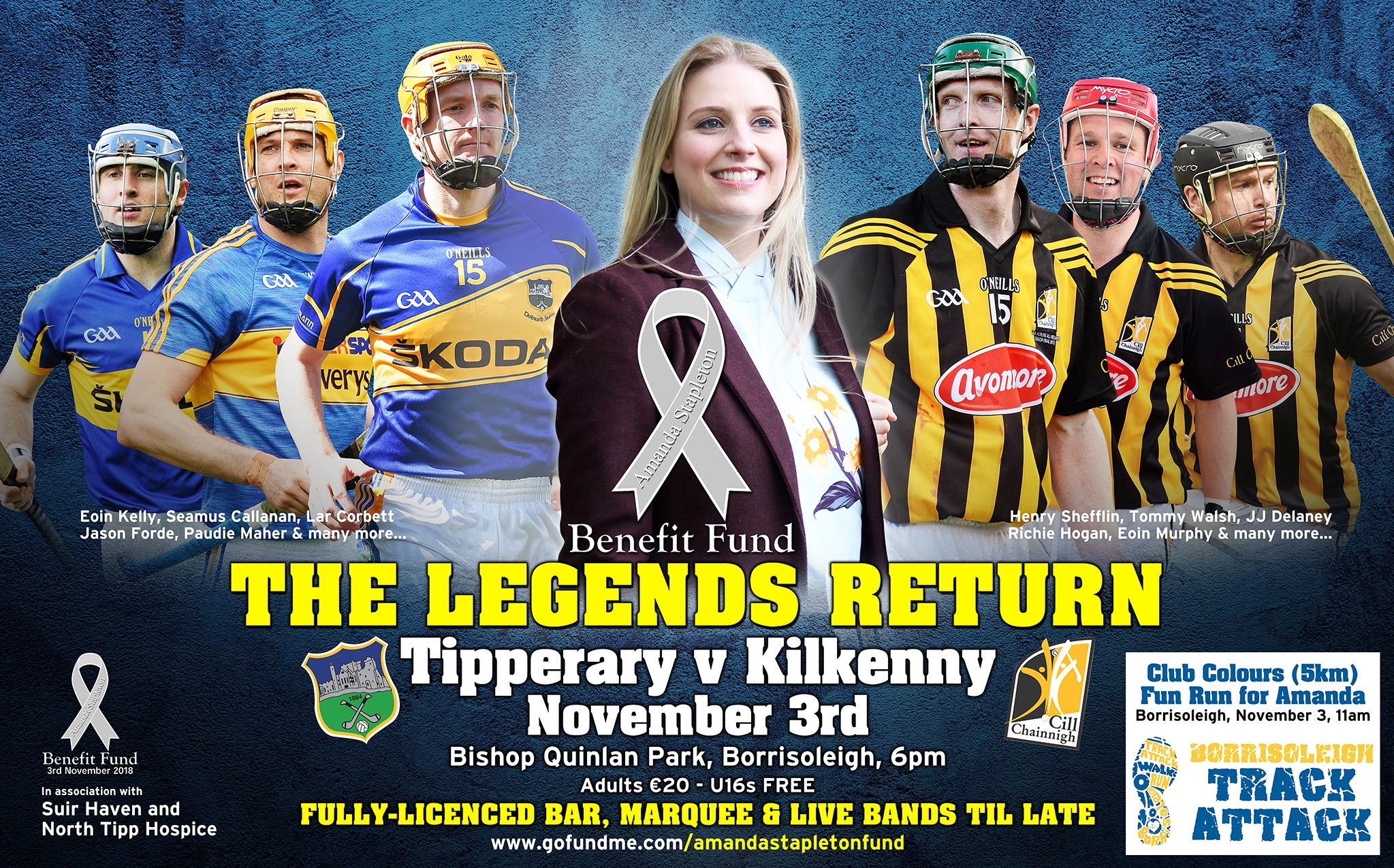 The Tipperary Water county senior football final has been decided for another year with congratulations going to Moyle Rovers who won their eight title following a 1-15 to 1-7 victory over Ardfinnan. Congratulations also to Peter Acheson (Moyle Rovers) on winning the ‘Man of the Match’ award sponsored by John Quirke Jewellers, Cahir.

The Tipperary Water county intermediate football final required extra time as Moyne-Templetuohy put in a strong late challenge to deny Golden-Kilfeacle of victory in normal time. That added time proved valuable to the mid men as they ground out a 1-18 to 2-11 victory to take the spoils.

Commiserations to both Ardfinnan and Golden-Kilfeacle who gave of the all on the day as well but unfortunately had to settle for runners up spot in their respective final.

There was two other county finals down for decision last weekend starting with Boherlahan-Dualla who return to intermediate grade following their win in the Tipperary Water Junior ‘A’ Hurling final. Extra time was required for Boherlahan as they eventually saw off the challenge of Skeheenarinky in New Inn.

Solohead took the honours in the Tipperary Water County Junior (B) Football Championship Final ensuring it wouldn’t be double delight for Moyne-Templetuohy last weekend. Congratulations to Boherlahan-Dualla and Solohead on their victories.

At divisional level congratulations go to Loughmore-Castleiney as they claimed the Centenary Agri Mid Senior Hurling title following another thrilling encounter with Thurles Sarsfields. Loughmore winning on a 2-21 to 1-21 score line after extra time.

A quick review of last week’s results is as follows;

Just three matches to contend with at county level this weekend where two of those will be finals. Boherlahan-Dualla are in action this time in the Tipperary Water County Junior (B) Hurling Championship Final where they will meet Mullinahone. Elsewhere, in the Tipperary Water County Junior (A) Football Championship Final, it is south v mid when Ballylooby-Castlegrace and JK Brackens square up in Cashel.

Fixture details for the above games are as follows;

There is action once again in West and South senior football and U21 hurling action across the divisions, which includes the O’Dwyer Steel West U21A Hurling championship final between Clonoulty-Rossmore and Cashel King Cormacs on Sunday next, November 4th, at 12 noon in Dundrum.

To keep up to date with all fixtures and results please check https://tipperary.gaa.ie/fixtures-results/

Commiserations to Cashel King Cormac’s who were defeated 1-16 to 1-13 by Lixnaw (Kerry) in the AIB Munster Club Intermediate Hurling Championship Quarter-Final last Sunday.

This weekend we send best wishes to our county senior champions who are both in action. Clonoulty-Rossmore will play Na Piarsaigh (Limerick) in the AIB Munster Club Senior Hurling Championship Semi-Final on Sunday November 4th at 1pm in the Gaelic Grounds and Moyle Rovers will take on Dr. Crokes (Kerry) also on Sunday at a Tipperary venue, yet to be confirmed, in the AIB Munster Club Senior Football Championship Quarter-Final.

To keep up to date with all Munster fixtures and results please check http://munster.gaa.ie/fixtures/club-championships-2018/

At last week’s October county board meeting and widely reported since, the Tipperary inter-county management teams for 2019 were ratified. In senior hurling Liam Sheedy will be assisted by Tommy Dunne as coach and Darragh Egan as goalkeeping coach with both men also serving as selectors. A further selector will be added to the management team in due course. Cairbre Ó Caireallan is the new strength and conditioning coach.

Following Tommy Dunne’s elevation to the senior panel, Paul Collins will take over the reins as manager in minor hurling with Shane McGrath coming in as coach.

In senior football Liam Kearns has added two men to his team which will see Martin Horgan coming in as coach and Paudie Kissane taking over strength and conditioning affairs.

Former Tipp senior football managers Tom McGlinchey and Peter Creedon are also back on board with Tom taking over as manager of the Tipp U20 football team with Paddy O’Flaherty appointed as coach/selector.

The full list of management teams is as follows;

Tipperary U20 Football Management 2019  – Tom McGlinchey – Manager, Paddy O’Flaherty – Coach/Selector with remaining selectors to be confirmed in due course.

We send best wishes to all for 2019 and beyond as players and supporters alike look forward to the action getting under way once again.

The extremely popular Hannigan made his senior championship debut against Kerry in 2006 and was a permanent fixture in midfield for the Premier ever since and played his last game in June, coming on as a second-half substitute in the qualifier loss to Mayo, in Semple Stadium. He amassed a fantastic 36 senior championship appearances for Tipperary, scoring 0-13 in the process.

In that time, he won three Allianz National Football League medals in 2009 (division 3), 2014 (division 4) and 2017 (division 3) and while he was unfortunate not to win a senior championship medal, his dominating midfield performances won him the respect of many players and critics up and down the country.

In 2005 he was a member of the under-17 Irish Compromise Rules team that defeated Australia to claim the series and also captained the county minor side that same year. He won a Trench Cup medal with Mary Immaculate College in 2008 and played a key role in Thomas MacDonagh’s historic county senior championship win in 2011 and also won divisional honours with them in 2007, 2008, 2009 and 2010. He has also captured junior football and intermediate hurling honours with his club Shannon Rovers. An accomplished hurler, he played wing-back on the St. Flannan’s Harty Cup winning side in 2005.

Perhaps his best year for Tipperary was in 2016 when he played a crucial role in the county’s march to the All-Ireland semi-final for the first time since 1935 when the Premier memorably defeated Cork, Derry and Galway before being unfortunate to see their brave efforts against Mayo in the semi-final fall just short.

The November Tipperary club draw will take place this Thursday night, November 2nd in association with JK Brackens GAA club in the Templemore Arms Hotel. The October main prize winner Ms K. O’Regan will receive her prize and best wishes to all in this month’s draw.

The second round fixtures of the Dr. Harty Cup Under 19A Hurling competition will be played on Wednesday week, November 7th. In Group A, Nenagh CBS will meet Ardscoil Ris, in Group C, Our Lady’s Secondary School, Templemore will play  Blackwater Community School, Lismore and in Group D, Thurles CBS will get their first taste of action this year when then meet Castletroy College.

The Dean Ryan Cup (Under 16.5 A Hurling) final between Thurles CBS and De La Salle has been refixed for Friday, November 9th at 1:30pm in Ardfinnan. Should a replay be required this will go ahead on Monday November 12th.

In the Corn Ui Mhuiri Senior (Under 19 A Football) commiserations to High School Clonmel who lost their opening round to Coláiste Choilm Ballincollig.

The Amanda Stapleton benefit match between Tipperary and Kilkenny legends goes ahead on Saturday next, November 3rd at 6pm in Bishop Quinlan Park, Borrisoleigh.

Tickets are on sale from members of the Borris-Ileigh GAA club as well as outlets in Borrisoleigh, Lar na Páirce in Thurles and surrounding areas all for €20 and U16’s go free. Tickets are also available online now and unfortunately, tickets will be limited so make sure to get yours now to avoid disappointment. Online details as follows;

There will be a marquee set up with live bands ’till late to entertain supporters. There is also a Club Colours 5km Fun Run at 11am on the day at the Track Attack course in Borrisoleigh.

We would encourage everyone to make an effort to support this worthy cause.

The 60 x 30 doubles All-Ireland finals were contested over the weekend with Tipperary players involved in 8 finals where they won four and lost four after an exciting weekend of handball.

Garryhill in Carlow was a lucky venue as the Ladies Junior Doubles pairing of Sinéad Meagher and Laura Shinnors (Nenagh/Lahorna) had a comfortable win and were in control from the start as they defeated the Dublin ladies. Paul Mullins & Eddie Farrell (Clonmel) followed the ladies to victory in the Masters A Doubles coming through a great battle with their Wexford opponents.

In Crinkle in Offaly in the SMAD David Moloney and John O’Donoghue (Cashel) were also victorious following their success over the Dublin pairing. In the Ruby Masters Final Paddy Collins and Jim Ryan (Ballina/Silvermines) buoyed up by the huge Tipp following took the title after a titanic struggle also against Dublin. Unfortunately, the DMAD pairing of Billy and Pakie Mullins (Clonmel) after winning the first set were reeled in by Kilkenny who won the next two sets for victory. In the Junior Doubles final John Ferncombe and Sean Maher from Cashel were defeated by Cavan.

In Talbots Inch in Kilkenny in GMBD Brendan Ryan and Willie Bourke (Ballina) were second best as Wexford took the honours.
As mentioned last week, in the GMAD in Clonmel Kevin Mullins and Adrian Johnson (Clonmel) lost out to their Meath opponents.

Congratulations to the Tipperary winners who are now All-Ireland champions.

Tipperary Health and Wellbeing Committee will host a Safe Talk (suicide alertness for everyone) on November 14th next in Our Lady’s School Templemore Recreation Room. Registration commences at 5.30pm and admission is free but pre-booking is essential.

This talk will help participants to provide practical help to persons they meet who may experience thoughts of suicide.

Congratulations to Declan Browne (Moyle Rovers) as he managed Graigue-Ballycallan to victory over Tullaroan in the Kilkenny intermediate hurling final last Sunday. Another Tipp man, Toomevara’s James McGrath managed Bennettsbridge who were defeated by Ballyhale Shamrocks in the senior equivalent.

Platinum, Gold or White Journal contract details can be made with the Journal Chairman – Tommy Kavanagh (914) 309 2363 or any of the journal committee; Pat Costigan, Pa Ryan, Geraldine Stapleton, Martin Dunne, Joe Grace, Donnacha O’Dwyer and Therese Crowe. All journal ads need to be returned before November 16th or email thomas.kavanagh@e-frontiers.com

The Mid-Tipp divisional final programmes are now live on the Tipperary Studies website at the links highlighted in the next paragraph.

All programmes in the Tipperary Studies collection for the four divisions are now scanned, as well as 300 match reports from the three local press titles in the county.

Over the next few weeks, the collections from North, South and West Tipperary divisions will also go live, once uploaded to the Tipperary Studies website.

The 2019 GAA Season tickets are now on sale and will once again provide fantastic value for supporters in next year’s league and championship. Adult ticket will cost €120 and U16’s €30. This will allow the ticket holder access to discounted tickets for the championship group stages in your code.

Benefits of the GAA Season Ticket include, access to an All-Ireland Final ticket (subject to meeting terms and conditions), AIB GAA club championship finals on March 17th, all Allianz league matches again in your code, including play offs, semi-finals and finals and also your county’s opening championship fixture of 2019.

The Adult Club+ version ticket costs €200 and also includes club championships fixtures in the chosen county and a guaranteed All-Ireland final ticket should your county qualify, again terms and conditions apply.
All tickets are subject to availability /terms and conditions, for more information see gaa.ie/seasonticket