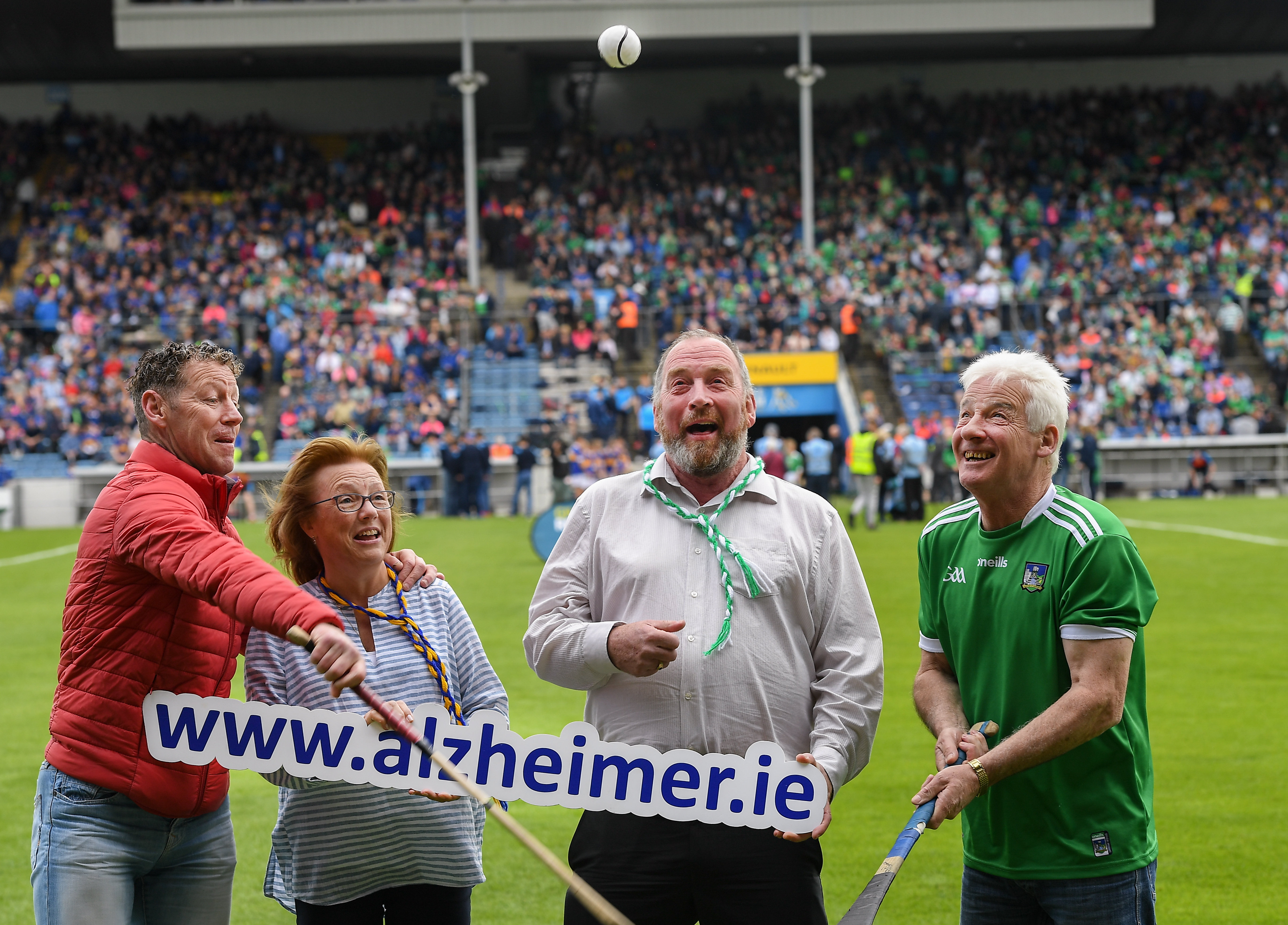 15 June 2019; Pictured at the launch of the Tipperary v Limerick Legends Hurling Clash in aid of The Alzheimer Society of Ireland, which will be held on Saturday, September 7th 2019 (5.00pm Throw-In) during World Alzheimers Month 2019, are from left, Ciaran Carey former Limerick star, Kathy Ryan Dementia Advocate, Kevin Quaid, and Gerry Quaid, Dementia Advocates, at Semple Stadium in Thurles, Tipperary. The match will be held at Nenagh Éire Óg grounds and is being organised by two leading dementia advocates Kevin Quaid and Kathy Ryan who both have a dementia diagnosis. Tickets will be available on Eventbrite. Photo by Ray McManus/Sportsfile *** NO REPRODUCTION FEE ***

When the tectonic plates of hurling giants collide, the force of nature created between these powers is something to be marvelled, it is unique, unrivalled and incomparable. The energy released, particularly where the plates meet, causes supporters to erupt into a frenzy of excitement and giddiness as they are transposed onto a new plateau full of hope and expectation, while they await their hero’s arrival on the hallowed plain of Croke Park.

Sunday next, August 18th, will be no different as Tipperary and Kilkenny collide at 3:30pm in the molten heat of battle before a sell-out attendance in Croke Park. This is the pinnacle of the hurling year, nowhere else would players or supporters want to be, as the coveted prize of a Celtic Cross awaits the side that unleashes the greatest force causing the other to crumble and buckle. Hopefully, that force come Sunday, will be blue and gold to the core and with it the dream of seeing the Liam MacCarthy Cup raised high to a volcanic Premier roar.

There have been 27 previous championship meetings between these great rivals, with Tipperary winning 14 of those to Kilkenny’s 12 and there was one draw. Of more acute and current interest is the match-up between opposing managers with the score settled on one apiece in All-Ireland Final showdown. Tipp manager Liam Sheedy will be going for two in a row on Sunday, albeit with a nine year time span. He has the passion, determination and the players to deliver; Sunday will be the ultimate examination when pitted against the most successful manager of all time in Brian Cody.

The record attendance for a Tipperary v Kilkenny championship meeting was set on September 7th, 2014, when the teams played a first ever championship draw, which was in the All-Ireland final, at Croke Park. Tipperary scored 1-28 and Kilkenny 3-22 when 82,179 patrons were present to witness that epic final, as Hawk Eye sent the game to a replay, by ruling John ‘Bubbles’ O’Dwyer had struck a long range free narrowly wide of the target. In 2009, there were 82,106 people present to witness Kilkenny winning their fourth title in a row. The third highest attendance of 82,016 saw Tipperary win the 2016 decider; on a day that, current captain, Seamus Callanan scored 0-13 in a man of the match performance.

There have only been two previous occasions in which neither of the All-Ireland finalists had won their provincial title, Cork and Kilkenny was the first such clash in 2004, while Clare v Cork in 2013 was the other.

Since the introduction of the initial second chance championship in 1997, only three counties have come back from a provincial final defeat, to win the All-Ireland title. The feat was first achieved by Offaly (1998), Cork (2004) and Kilkenny (2012). Whatever the result on Sunday, this statistic will be added to by whichever captain lifts the Liam MacCarthy Cup, all of Tipperary hopes that Seamus Callanan will be the man.

And finally as we close out the short review of history between the sides, the only previous game played on August 18th, was the classic 2002 semi-final.

So, heading into the remaining days leading up to this weekend, it’s time to get the flags, bunting and colours out and adorn every parish of the county from top to bottom with blue and gold in support of our men and ladies who have prepared long and hard for their matches this weekend.

To Seamus Callanan and the panel, Liam Sheedy and his management team we send our very best wishes and support to all as we get ready for road to Croke Park.

The referee on Sunday will be James Owens (Wexford) who also refereed last year’s final. This will be his third final in charge having also previously overseen the 2015 final.

Before the big game on Sunday, Tipperary will keep a tradition alive that began on the 9th of September 1923. On that occasion, Johnny Leahy, captain of the Tipperary hurling team playing against Kilkenny in the All-Ireland final, brought his players before the game to pray at the spot in Talbot Street where Sean Treacy of Soloheadbeg the renowned freedom fighter was fatally wounded in action in the War of Independence by British crown forces on October 14th 1920.

So at noon on Sunday next, Tipperary folk up for the All-Ireland hurling final will assemble in Talbot Street to pray and remember that heroic figure of the War of Independence. The speaker on this occasion will be Aogán Ó Fearghail Iar-Uachtaráin Cumann Lúthcleas Gael. All are welcome to attend.

In what will be a hugely anticipated repeat of this year’s Bord Gáis Energy Munster U20 Hurling Final, Tipperary and Cork will meet in the All-Ireland decider in the LIT Gaelic Grounds on Saturday week, 24th August with a 6.00pm throw-in and extra time will be played in the event of a draw

While the main focus of attention this weekend will be centred on the All-Ireland hurling final, there all two hugely important games for Tipperary camogie and ladies football this Saturday, both of which have the potential to define the respective campaigns.

With that in mind we send best wishes to the Tipperary senior camogie team who Kilkenny in the Liberty Insurance All-Ireland Senior Camogie Championship semi-final in LIT Gaelic Grounds this Saturday August 17th where throw in is at 5:30pm.

All support for our Ladies in both of these games on Saturday would be hugely appreciated.

To start off a busy weekend the Tipperary Supporters Club is hosting a Golf Classic at Castlewarden Golf Course, Co Kildare on Friday 16th August 2019, two days before the All-Ireland Finals. Any individual, group or company that would like to enter a team or sponsor a tee / green should contact John Tierney 087 6821398 or by email to johntierney105@gmail.com

The Tipperary Cúl Camp ambassadors for this season are Jason Forde and Michael Breen.

We express our sympathy to the family of John Coffey (Boherlahan-Dualla) who passed away over the weekend.

John is pictured below when celebrating his 100th birthday last year where he shared the occasion with his relations at Elm Green Nursing Home in Blanchardstown. 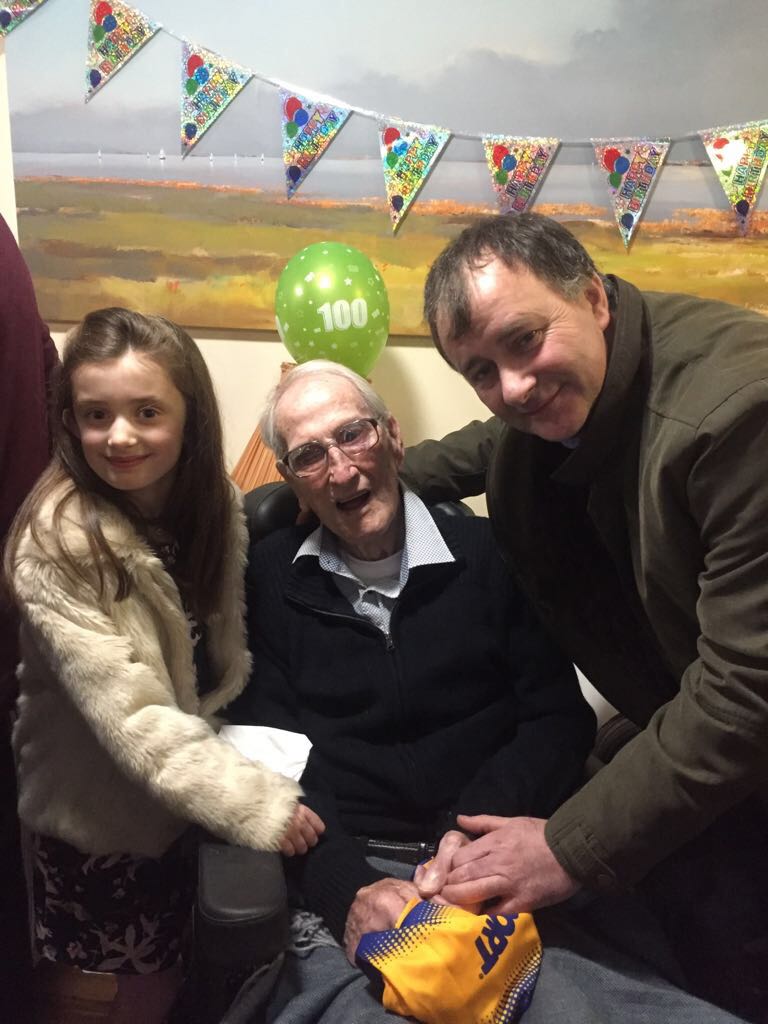 The following is courtesy of Noel Dundon, Tipperary Star.

Tipperary is this week mourning the passing of the country’s oldest All-Ireland medal holder, the late John Coffey, formerly of Boherlahan, who died in Dublin in his 102nd year.

A member of that famous Coffey hurling family which gave many men to the Premier County teams, including his nephew, the late Michael  Murphy (Thurles Sarsfields) who captained Tipperary to win the All-Ireland Final in 1964, John Coffey led a very full life, residing for a time in Canada and the UK when he had finished his hurling days.

He played league and championship with his native county for nine years spanning from 1940-1948 and was to be one of only four All-Ireland medallists to live past the age of 100.

Born in January 1918, John made his debut on the inter-county scene at the age of sixteen when he was selected for the Tipperary minor team. He enjoyed three championship seasons with the minor team, the highlight of which was the winning of an All-Ireland medal in his debut year in 1934.

He was picked to join the Tipperary junior team and played without success between 1936 and 1940, by which this stage he had also joined the Tipperary senior team, making his debut during the 1940 championship.

John was a regular member of the starting fifteen at various times over the following nine seasons and won his sole All-Ireland medal in 1945 with the great John Maher at the helm. He also won one Munster medal in that year and he retired from inter-county hurling following the conclusion of the 1948 championship.

That victory in 1945, Tipperary’s 13th senior title, was regarded as a special one because The Premier County defeated Cork who were striving for five in a row. Tipperary took them down by eight points after putting in a tremendous performance in their Munster semi-final. Beating Limerick by three points in the Munster final required another huge effort.

Educated in Ballytarsna National School, Cashel CBS and having worked on the land, John became a member of the Army Reserve during World War II. His section was sent to South Kerry and one of their tasks during those ‘Emergency’ years was to ascend Mount Brandon in order to carry down the corpses of six German airmen.

The Coffey’s of Boherlahan had a very remarkable hurling story – Jerry, John, and younger brother Flor played together on the club team that won the 1941 county title against Éire Óg Annacarty-Donohill, – the club had to wait until 1996 to see the Dan Breen Cup again.

Jerry captained Tipperary in 1942, when a Munster final with Cork was lost by 14 points. Flor, who lined out in county colours between 1941 and 1950, playing at left corner-back in 1945, took another Celtic Cross in 1949, after Tipperary hammered Laois. Flor, then living in Thurles won another Tipperary senior title in 1952, appearing in the blue and white of Thurles Sarsfields. He passed away, at 93, in April 2014.

John Coffey moved to Dublin for work in 1948 and joined Young Ireland. This club was Tipperary orientated and overseen by Tommy Treacy, one of the county’s finest hurlers during the 1930s. John was very proud of winning a senior title with Young Ireland in 1949, when they defeated Faughs. He settled on Dublin’s Northside, in Phibsboro, and became a well-known figure in the community and lived in Shandon Park for much of his time. Youngsters regularly called to his home to see his All-Ireland medal – John, always obliged.

The Alzheimer Society of Ireland are hosting a unique fundraising initiative, which was launched by two leading Munster dementia advocates, Kevin Quaid and Kathy Ryan, who both have a dementia diagnosis, at Semple Stadium in June, will be held on Saturday, September 7th at Nenagh Éire Óg grounds (5.00pm Throw-In).

15 June 2019; Pictured at the launch of the Tipperary v Limerick Legends Hurling Clash in aid of The Alzheimer Society of Ireland, which will be held on Saturday, September 7th 2019 (5.00pm Throw-In) during World Alzheimers Month 2019, are from left, Ciaran Carey former Limerick star, Kathy Ryan Dementia Advocate, Kevin Quaid, and Gerry Quaid, Dementia Advocates, at Semple Stadium in Thurles, Tipperary. The match will be held at Nenagh Éire Óg grounds and is being organised by two leading dementia advocates Kevin Quaid and Kathy Ryan who both have a dementia diagnosis. Tickets will be available on Eventbrite. Photo by Ray McManus/Sportsfile

The Tipperary legends who have signed up to support the initiative are Michael Ryan, Michael Cleary, Brendan Cummins, Colm Bonnar, Declan O’Meara, Kevin Tucker, Eddie Tucker and Brian Gaynor. And, on the Limerick side, the legends that have signed up are Joe Quaid, Ciaran Carey, T J Ryan, Mike Nash, Gary Kirby, John Quaid and Gerry Quaid. More legends will be announced in the coming weeks.

In addition to this, prominent GAA journalist Damian Lawlor has been confirmed to do MC, match commentary and a Q&A with legends afterward and the Liam MacCarthy Cup will also be present on the day and at the evening reception after the match in the Abbey Court Hotel in Nenagh.

Tickets for the event can be purchased via Eventbrite at €15.00 for adults and kids going free with all the money raised going towards providing community services and advocacy supports in the Munster area and beyond. Tickets can be purchased today via this link: tinyurl.com/y2kmefyv