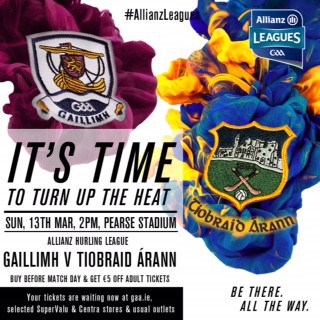 Galway and Tipperary played out a draw in the Allianz Hurling League Division 1A on Sunday March 13th at Pearse Stadium Galway.

By Declan Rooney at Pearse Stadium for GAA.ie

Both teams will need a win next week to avoid a relegation play-off after a brilliant finish at Pearse Stadium saw the sides finish all square on Sunday afternoon. Joe Canning and Iarla Tannian goals looked to have given Galway a second win of the campaign, but after Canning landed a late sideline cut, John O’Dwyer levelled the game with the final puck.

Niall O’Meara goaled early on for Tipp but once Galway settled late in the second-half they improved in the second-half and should have closed out the win. It was a very sluggish start from Galway as their inability to retain possession looked to have cost them dearly after seven minutes the home side trailed by 1-3 to 0-1 as Tipperary made he most of their host’s generosity.

Barry Heffernan got Tipperary off the mark with a point from the right wing in the first minute, and two minutes later Noel McGrath scooped the ball into the path of Niall O’Meara who beat James Skehill with ease.

Galway began to gain a footing in after ten minutes though, but they continued to struggle to win their own puckouts as Heffernan, Ronan Maher and Padraic Maher were well on top at half-back for Tipperary. Only a loose ball from Jason Flynn denied Galway a goal when Conor Whelan was driven wide to collect his teammate’s pass after ten minutes, but Flynn and Canning hit good points from play moments later to put two points between the sides.

The late withdrawal of John Hanbury forced David Burke out of midfield in the reshuffle that followed and Galway struggled to come to terms with Brendan Maher and Michael Breen in that area as a result. Both Tipp midfielders hit two points each from play before the break as five points without reply between the 15th and 28th minutes gave Tipperary a seven-point lead.

But Galway finished the half very well, and with Fergal Moore driving standards at the back they were soon back in contention. A couple of Canning frees cut the gap to five points and deep into injury-time Aidan Harte found Canning with a brilliant diagonal pass and the Portumna man shook off a couple of tackles and hit the net with a powerful shot.

That goal meant Tipperary led by 1-10 to 1-9 at half-time, but after Canning drew them level from a free, Galway took the lead for the first time when Tannian’s mishit shot found the bottom corner of the net after 42 minutes. The sides exchanged scores as Davy Glennon and Canning pointed from play for Galway and Cathal Barrett and John O’Dwyer did likewise for Tipperary.

O’Dwyer was twice denied by Skehill saves in the space of a minute – the first chance came from a loose Galway puckout – and the other end points from Flynn and Niall Burke gave Galway a two-point cushion. Tipp had a golden chance to take the lead ten minutes from time but Breen’s handling let him down as the goal gaped, and after Canning’s sideline, Tipp forced a draw when O’Dwyer scored from the right.

Tight match between Galway and the Premier County ends in a draw https://t.co/fAx2ewbFmz pic.twitter.com/iaYPJQuePF

The Tipperary team to play Galway in the Allianz Hurling League Roinn 1A round 4 in Pearse Stadium, Galway at 2pm next Sunday, March 13th, has been announced by Tipperary manager Michael Ryan and shows three changes to the side that lined out the last week.
Kieran Bergin and Adrian Ryan get their first start in this season’s league, Kieran lines out at centre forward having returned to action as a substitute last week while Adrian lines out at right corner forward. The other change sees Niall O’Meara getting the nod at top of the left.

In relation to players coming back from injury, their progression is being closely monitored and they will be afforded every opportunity to prove their fitness right up to throw in should they be called upon for duty in the course of the fixture.