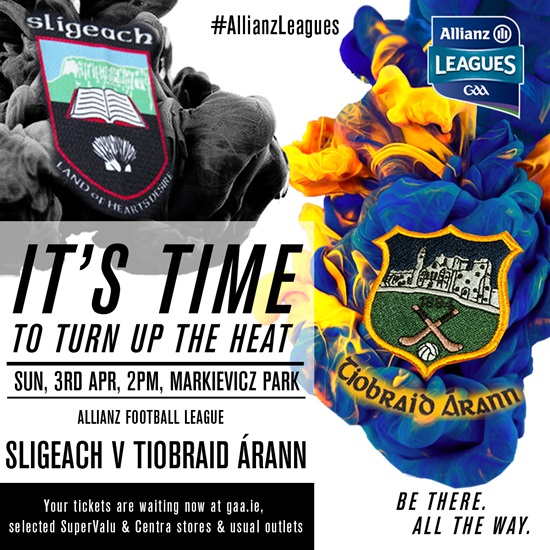 Sligo drew with Tipperary on a scoreline of 0-18 to 3-9 in Round 7 of the Allianz Football League Division 3 on Sunday April 3rd at Markievicz Park Sligo.

Conor Sweeney bagged the equalising point in stoppage-time for the visitors but it was industrious midfielder Alan Moloney’s close-range goal in the last minute – Tipp’s third goal of the afternoon – that sparked the visitors’ unlikely comeback. Sligo were four points clear by the 69th minute at 0-18 to 2-8.

Teenager Kyle Cawley appeared to put the icing on Sligo’s cake with two sharply-taken points in the last five minutes. But Sligo, who leaked two goals in the first half, were unable to keep Tipperary at bay.

Then came Sligo’s best spell, as they went 0-10 to 2-2 ahead and were also grateful for goalkeeper Aidan Devaney’s point-blank stop to deny Quinlivan a second goal. But Tipperary stayed within reach with Jason Lonergan’s point before the break making it 0-10 to 2-3 at half-time.

In a tough away encounter against Sligo in Markievicz Park, in round 7 of the Allianz Football League on Sunday next, Tipperary manager Liam Kearns has named his side looking to secure their Roinn 3 league status. Forced to make one change, Kevin Fahey moves back to the corner while Shane Leahy is named at right half back.

The Tipperary football line-out is as follows –